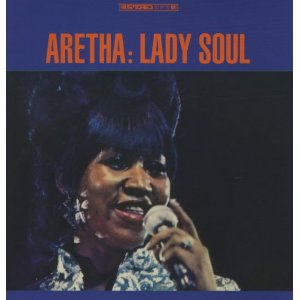 The death knell for the analogue LP first started tolling in the mid-’80s with the advent of a new and revolutionary digital music format called a CD (or compact disc, as it was known back then). But a quarter-of-a-century down the road and vinyl LPs (and 12-inch singles) are still in demand and being pressed up: ironically, it looks like that the humble, low-tech LP will outlast the CD, whose popularity and relevance is now in decline thanks to the download revolution. Major record companies – which were at the front of an enthusiastic queue to axe vinyl in the late-’80s – are now putting out special vinyl editions of both new and antique albums. A case in point is this lovely vinyl version of one of Aretha Franklin’s greatest LPs for Atlantic in the 1960s – ‘Lady Soul.’ This version reproduces all the original LP artwork and is pressed up on heavy duty 180 gm vinyl, the type of wax that collectors crave. Sonically, it sounds terrific – warm, fat and feisty with a lot of depth as well.

So what of the album itself? Well, diehard soul buffs should be on intimate terms with ‘Lady Soul’ but for the uninitiated let’s just say it represents one of the Queen of Soul’s finest hours. Released in 1968, it was produced by the late Jerry Wexler and enhanced by on-the-money arrangements from two other Atlantic luminaries – Arif Martin and Tom Dowd. Kicking off with the sassy Don Covay-penned ‘Chain Of Fools,’ it includes the classic ballad ‘Ain’t No Way’ – written by Aretha’s younger sibling, Carolyn – as well as Aretha’s definitive covers of classic songs such as Goffin-King’s ‘(You Make Me Feel Like) A Natural Woman,’ Curtis Mayfield’s Impressions’ anthem, ‘People Get Ready,’ and the Young Rascals’ ‘Groovin’.’ Aretha shows her funky side on the splendid moody groover, ‘Niki Hoeky,’ one of the LP’s least heralded tracks.

Forty-four years after it was recorded, ‘Lady Soul’ still shines brightly as a beacon for authentic gospel-reared soul music: it remains an unimpeachable masterclass in soul singing and a landmark album in the career of arguably soul’s greatest ever female singer. (By the way, Otis Redding’s majestic 1965 album ‘Otis Blue‘ is also now available from Rhino on vinyl).