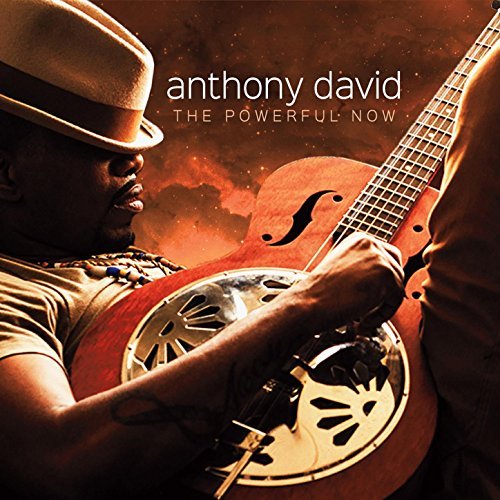 Anthony David emerged from Atlanta’s neo-soul scene in the late 1990s working closely with the lovely India.Arie. He debuted in 2004 with ‘Three Chords And The Truth’ and quickly won a reputation as a sensitive singer/songwriter with a flair for acoustic soul. Never afraid to tackle issues in his songs, his next three albums consolidated his position as neo-soul brand leader. Little wonder that he became a favourite with the Obamas and I’m sure that both Mr President and his gracious wife will continue their love for Mr D when he sends them this, his fifth solo album.

The 12 tracker that is ‘The Powerful Now’, you see, offers everything that we’ve come to expect from Anthony David. There are the gentle acoustic ballads, the questioning, provocative tracks and plenty of story telling … all delivered in Anthony’s usual, melodic, sonorous manner… but there’s more… some new directions and what we might call a more experimental approach. ‘Out Of My League’ is a prime example. It comes on like an electro hybrid of Robert Palmer and Gary Numan and there are more of those effects on the up-tempo ‘I Don’t Mind’. I’ve noticed that more than one radio DJ and critic has singled out both cuts out as album highlights. Me? I’m not convinced by the bombastic crashing and burning.

My choice as standout cut is the old school flavoured ‘Booed Up’. This is a gorgeous duet with a lady called Mylah. I can’t tell you much about her save that her voice melds beautifully with Anthony’s. It’s a lazy, languid groove that boasts a beautiful melody and a lovely honest, romantic lyric. We’ve got this one on repeat here and it conjures up great images of Mr and Mrs Obama waltzing round the Oval Office to it!

Elsewhere, ‘Never Again’ (feat. Reesa Renee), ‘Charge’ (feat. Carmen Rogers) and ‘Inevitable’ are decent ballads while the acoustic ‘Amber’ harks back to Mr David’s earlier days. Best up-tempo moment is the opener ‘Ride On’. Never frantic, it’s a solid R&B beater with a lyric line that’s a cut above the norm for the genre. .. but you’d expect that with Anthony David.