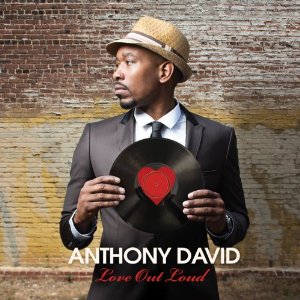 We’re reliably informed that Anthony David is one of Barack and Michelle Obama’s favourite singers. Listening to the Grammy-nominated, Atlanta singer-songwriter’s fourth studio album, it’s easy to hear why. The music on ‘Love Out Loud’ is smooth and sleek with a hint of sophistication. By the same token it’s still soulful and respects its soul heritage. Equally it’s not banal and trite. Like the music of Bill Withers, with whom he’s often compared, David’s creations are mature, thoughtful. responsible and socially aware. In short, like the couple in the White House – and millions of others – Anthony David hasn’t forgotten where he’s come from but he’s also sure about where he’s going and what he wants to do and be when he gets there. Anthony David makes aspirational music – but it’s not blind and greedy aspiration, rather, it’s a caring aspiration – a hope, expressed in music, that everyone can share happiness and good times.

Maybe it’s no coincidence then that the new album’s opening track is called ‘Aspiracy Theory’. Get past the overlong spoken intro and you can enjoy a crisp beater in which the singer proclaims that he’s simply looking for a better place and a better way. Beats-wise ‘Can’t Look Down’ is a much better bet and one that will surely please the Modern soul brigade. Best of the ballads is the ultra contemporary ‘Official’. It’s a duet with Algebra (with whom Anthony worked on his Urban no. 1 hit ‘4 Evermore’) but soul purists might be put off it by the presence of Phonte. Equally, they may be disappointed by the Lovers Rock styled ‘Livin’ It Up’. This one features Demetria McKinney and Gramps Morgan and its has a light touch about it that acts as a pleasing counter point to the more intense tracks like ‘Movie Night’ and ‘Control Freak’. ‘So Jaded’ – with its retro feel – is another album highlight while on the bumpy title track, Anthony’s joined by members of All Walks Of Life – a performing arts youth organization from his home town of Savannah, Georgia… underlining the fact that socially, not just musically, Anthony David hasn’t forgotten where he came from.