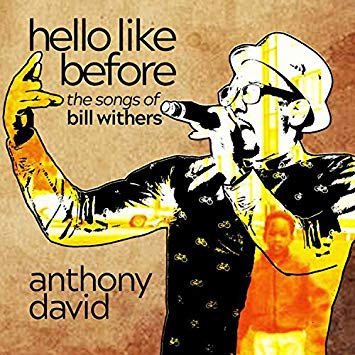 Back in the summer new age soul man Anthony David announced that he was working on a tribute album to one of his musical heroes and seminal influences – the wonderful Bill Withers. Anthony made the announcement with the release of a single –a cover of Withers’ subtle yet powerful anti-war song, ‘I Can’t Write Left-Handed’. Interestingly that single and the announcement were both scheduled on July 4… the birthday of both Bill Withers and, of course, the USA!

Now Anthony completes his present to Bill with the release of the full 10 track album… and what a lovely present it makes – not just for Bill Withers but for anyone who loves well crafted songs beautifully presented… proper soul music, if you would.

The aforementioned single ‘I Can’t Write Left-Handed’ isn’t one of Bill Withers’ best known songs. If I remember rightly it was initially only ever released on Bill’s ‘Live At Carnegie Hall’ album. But on release Anthony explained that though not that well known it was one of his favourite songs – and one that had personal resonance because of his time in the military during the US Desert Storm mission and a good number of the rest of the album songs come from the lesser known areas of Withers’ extensive back catalogue.

So if you’re not that familiar with them, here you can enjoy tunes like ‘Hope You’ll Be Happier’, ‘Kiss My Love’ and ‘I Don’t Know’. Of course the album also features many of Withers’ really big songs ‘Use Me’, ‘Grandma’s Hands’ and ‘Lovely Day’ amongst them. Given Anthony David’s reverence for Bill Withers, you won’t be surprised to know that his “new” versions are respectful – never straying too far from the classic Withers’ templates. There are some subtle nuances though – like the Jobim-esque intro to ‘Hello Like Before’ – a tad more Brazilian that the original and just as lovely. And therein lies this album’s appeal. Bill Withers has long been retired (good on him, we say!) and good on Anthony David for reminding us of his special talent and artistry!