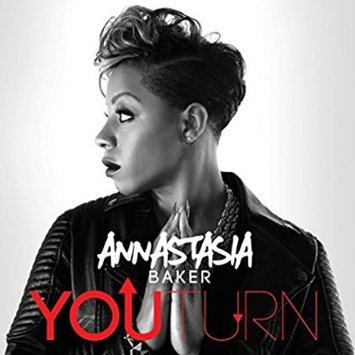 Avid TV talent show viewers might well be aware of newcomer Annastasia Baker. She was a finalist in the 2010 series of X Factor. Equally, Gospel fans will know her from ‘Time 2 Shine’ a TV gospel showcase which led to Ms Baker being nominated for a MOBO. For the rest of us, well, the time has come for us to acquaint ourselves with a powerful, UK vocalist who launches this – her debut album in June.

‘You Turn’ is a no-expenses spared kind of debut, with Ms Baker’s people throwing everything at the album to ensure a full, lavish, “produced” sound. Similarly to ensure success (hopefully) they’ve filled the album with all kinds of flavours and feelings so that all kinds of listeners can have something to latch onto. Equally the lyrical messages veer from the spiritual to the secular while some are ambiguous.

The set’s first single is the swaggering reggae-fired ‘Pass It On’. It’s a catchy duet with Joshua Rogers and, an obvious nod to the singer’s heritage, it’s the only Caribbean flavour on offer. Elsewhere the singer channels an Amy Winehouse bump and grind kind of thing on ‘New Shoes’ and there’s a contemporary R&B feeling on the more sedate ‘Thank You For Saving Me’ – a convincing Gospel tune… the kind of thing that Ann Nesby and Helen Baylor used to do so well. ‘First Love’ is folksier but builds to a big climax and as climaxes go the ballad ‘Fire’ takes honours. It’s one of those over-wrought, big dramas so beloved of 21st century female singers… I guess it’s on the album as some kind of diva rite of passage. ‘Forgive’ is a broody item while ‘Got You Back’ is sparser.

Best cut on the album though is the big cover – a version of Tramaine Hawkins’ ‘Going Up Yonder’ (some may know it via the Ruben Studdard recording). Ever an uplifting Gospel anthem, Annastasia cranks up the optimistic joy quotient and prefaces it with a short explanation of what that song in particular and Gospel in general means to her. It’s a great ending to a varied album… held together and given a unity by the girl’s powerful, big, BIG voice.