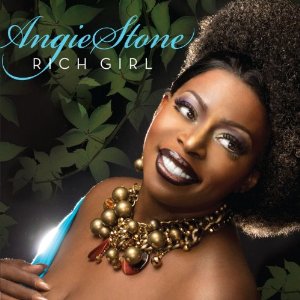 Looking on the cover every inch like the lady in the album’s title cut, Angie Stone returns with her sixth solo album. Her last set (2009’s ‘Unexpected’) was issued on the revitalized Stax label but she’s placed her new 15 cuts with Saguara Road Rhythm. No reason’s given for the switch other than the hint that Angie wanted a bit more control over the finished project. She says “I shaved a lot of my originality off when merging with so many other people. Fans weren’t getting Angie Stone. They were getting Angie and so-and-so. I knew I had to get back to my own music and skills. It’s time for Angie to do Angie”. That said, ‘Rich Girl’ is still a collaborative effort with the South Carolinian neo soul star working with different teams of writers and producers. What brings the unity though is the consistency of Ms Stone’s voice. It can do soulful rasp; it can be street tough; it can be silky smooth; it can only be Angie Stone.

Hear that magic voice at its best on the shimmering ballad that is ‘Sisters’. It has the feel of peak time Isley Brothers about it and closes the album in fine style. Other big ballads on the set include ‘Alright’ and ‘Rich Girl’ itself. Dancers enjoyed the album’s summer single – ‘Do What U Gotta Do’ and it still sounds good with more of the same bumpy rhythms on ‘LIvin It Up’ which betray a little R Kelly influence. Best of the foot tappers though is the Chic-flavored ‘Back-Up Plan’ –very retro. Much more contemporary is the almost R&B thumper, ‘I Can’t Take It’, though the cut I keep going back to is ‘U Lit My Fire’- very catchy. In between all of this there’s a thoughtful spoken word piece from Malcolm Jamal Warner while the album’s prefaced with a short intro piece called ‘Real Music’. Angie does indeed deliver “real music” and her fans will be delighted. ‘Rich Girl’ is a great contemporary soul set but just lacking in one really big tune … a magical ear worm like, say, ‘Nor More Rain’ or ‘Wish I Didn’t Miss You’. Check our interview archive for a 2010 conversation with Angie.