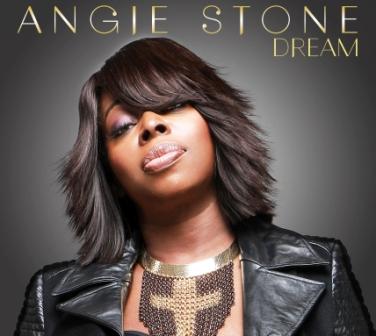 South Carolina’s Angie Stone has a great CV. Raised in the gospel tradition, her secular debut was with Sequence. She then moved on to session work with artists like Mantronix and Lenny Kravitz before joining Vertical Hold. Then in the mid 90s she worked with D’Angelo (they have a son together). That seminal collaboration was the eventual launch pad for Angie’s solo career. Albums like ‘Black Diamond’, ‘Mahogany Soul’, ‘Stone Love’, ‘The Art Of Love And War’, ‘Unexpected’ and ‘Rich Girl’ made her every soul connoisseurs’ favourite and when it was announced earlier this year that a new album was on the way, there was a real buzz around the real soul community. That expectation was cranked up with the lead single – the lovely ‘2 Bad Habits’, one of 2015’s best soul singles.

That tune stands out on ‘Dream’, but, as you’d expect with Ms Angie Stone, it’s not the only winner on offer. The LP opens strongly with the strutting ‘Dollar Bill’. It’s a crisp beater, just perfect for the demands of the modern soul community and, importantly, for mainstream radio. ‘Quits’ is another great dancer… with a catchy instrumental hook, there’s just a whiff of classic Motown about this one. ‘Didn’t Break Me’ offers more of the same. ‘Clothes Don’t Make A Man’ is another clever construction. Samples from, I think, ‘The Cincinnati Kid’ and Motown drum roll all add to the excitement.

But Angie’s remarkable voice was made for balladry and there are four great slow jams here. ‘Begin Again’ is a searing ballad with input from Dave Hollister, ‘Dream’ is a gentle builder, ‘Forget About Me’ is old school soul at its best, while ‘Magnet’ is simply outstanding. Angie has never sounded better and the song itself is a remarkable piece of work (Mind you, it should be. It has no less than six authors!) And, we’re told that the song is Angie’s favourite cut, even though its focus is being attracted to the wrong kind of men.

Angie also tells us that this long player is all “About the three Ps… Pain, then the Process to get the Promise!“. Maybe I’m not qualified enough in the three Ps to offer meaningful comment, but I’m musically experienced enough to know that in ‘Dream’s we have one of the very best soul albums of 2015!