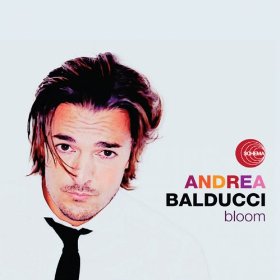 Andrea Balducci is an Italian crooner who’s hitched his star to the bandwagon that’s carrying Michael Bublé ever onwards and upwards. ‘Bloom’ is his debut album and it’s released on vogue-ish Milanese label Schema Records, who have a reputation for decent Euro soul and jazz. To help Balducci deliver, label bosses have drafted in some biggish names on the European soul/jazz scene –most notably Pietro Ciancagini the man behind Mario Biondi’s success and Teppo Makynen (drums), Jukka Eskola (trumpet) and Timo Lassy (tenor sax) from Finland’s acclaimed jazz outfit the Five Corners Quintet. Between them they give a deal of credibility to proceedings and make the music maybe more Jamie Cullum than Michael Bublé.

The material has also been wisely selected. There’s a good variety of covers ranging from the standard ‘Every Time We Say Goodbye’ through to pop classics like the Boxtops’ ‘The Letter’ and soul chestnuts like Little Anthony and the Imperials’ ‘Hurt So Bad’. To temper the familiarity there are two original songs both from the pen of Milan musician, Emanno Principe. They’re ‘Within Myself’ and ‘I Will Never Stop Loving You’ and neither sound out of place set against their more well-known neighbours. ‘Within Myself’ is a loose, swinging affair – redolent of Jamie Cullum while ‘I Will Never Stop Loving You’ offers a more soul-based groove.

Highlights of the album are the aforementioned ‘Hurt So Bad’ (it comes in two versions by the way) and a slinky take on the Classics IV tune, ‘Spooky’. Always a great song, Balducci does a great job, with the backing vocalists and Jukka Eskola’s trumpet adding real colour. A word of praise too for the keyboard playing of Luca Mannutza. Throughout, he offers the most sympathetic of accompaniment – most notably on the Marvin Jenkins-penned ‘Big City’… a song best known to jazzers via the Cannonball Adderley/Ernie Andrews version – little wonder that the jazz devotees who run the Schema label have chosen the cut as the lead single.