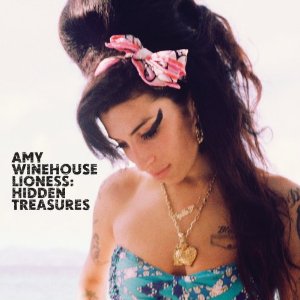 This is the late Amy Winehouse’s third full album and many of the music critics (chiefly those employed by the so-called “heavyweight” broadsheets) have been less than kind. They’ve talked about exploitation, Christmas cash-ins and even rip offs! Let’s be clear though – those critics are professional curmudgeons. They’re paid to be unkind and often the more unkind they are, the higher their professional status. Most aren’t fans and when all’s said and done, it’s the fans that are at the important business end of the music biz and most are savvy enough not to be taken in by fancy words no matter how cleverly they may be expressed.

You know by now that the music here isn’t totally brand new. The 12 tracker is a collection of previously unreleased tracks, alternative versions of existing classics and some new material. The set has been put together by long time Amy W collaborators Salaam Remi and Mark Ronson who knew when working with the material that they had music that deserved to be heard. And they’re right. And what’s more, the fans – the people who count – will love it too.

No one cut stands out. It’s all equally good and hugely accessible. Different people will select their own faves. Older fans (and there’s a lot more of them than you might think) will love the versions of ‘Our Day Will Come’ (given a delightful reggae lilt), the scatty version of ‘The Girl From Ipanema’ and the dramatic treatment of the Shirelles’ ‘Will You Still Love Me Tomorrow’. Younger devotees will possibly go for ‘Like Smoke’ (featuring Nas) while everybody  will enjoy the stripped down version of ‘Valerie’ and the lovely ‘Tears Dry’. The treatment of Leon Russell’s ‘A Song For You’ is outstanding too. Amy takes the Donny Hathaway version as her template and at the end, with the tape still running, she reveals her passion for the singer (who, like Amy, was bedevilled by his own personal demons – so much so that he took his own life).

Like Donny Hathaway, Amy Winehouse always gave everything. Veteran crooner Tony Bennett realized that fact straightaway when he came to record the song ‘Body And Soul’ with her. That duet is, fittingly, included here and how appropriate the title and sentiments are. It sums of the artistic essence of Amy Winehouse and that, I think, is the point that the clever-Dick critics are missing.