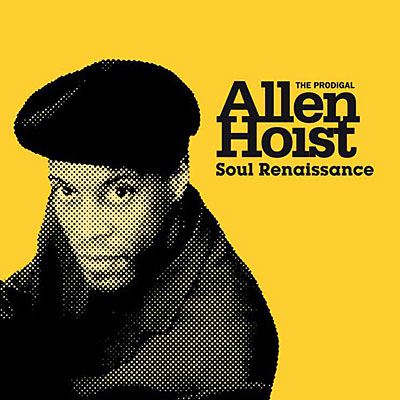 Allen Hoist is a New York soul man who now works out of Paris. He first came to the City Of Light when touring as the vocalist in Mongo Santamaria’s road band – a fact that explains the considerable rhythmic Latin feel to this 13 tracker… heard to best effect on the LP’s two key cuts – versions of Marvin Gaye’s ‘Inner City Blues’ and the Temptations’ ‘Papa Was A Rolling Stone’. Both classics are given a soulful house treatment – driven by swaying samba rhythms, and I know that soul purists aren’t too keen. They believe that what they call Hoist’s ‘lightening’ takes away from the sombre, serious messages of both songs. Of course, we’ll never know what Gaye or Whitfield make of them, but I quiet like what Hoist’s achieved. He tries different approaches to three other classics – ‘The Closer I Get To You’, ‘Lady Marmalade’ and ‘Summertime’ but they don’t work out so well. The first is mainly a cappella (in the mood of Take 6) and it seems to loose the song’s inherent warmth; the second becomes a rather disjointed Latin beater, while ‘Summertime’ is a mid-tempo jazzy reading that doesn’t quite hit the spot. Elsewhere, ‘Filthy McNasty’ is Latin instrumental, ‘With Love’ has a feel of Peven Everett about it and ‘You’ll Never Know’ has some crisp beats. There are also two brief jazz scat segments (betraying Hoist’s love of the genre – his 2000 album ‘Just Before Spring’ was straight jazz) and remixes of ‘Inner City Blues’, ‘With Love’ and ‘Lady Marmalade’ – all of which go deep into samba school territory. For more details on this and other albums from the quirky French Soulab label go to www.soulab.com