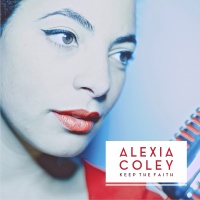 Though ‘Keep The Faith’ is Alexia Coley’s debut solo album, she’s been on the London soul scene for a couple of years and three limited edition singles have found their way onto the playlists of BBC Radio 2, Six Music and BBC London. Live, the Ladbroke Grove lass has played the Big Chill Festival and clubs like The Paradise, Mau Mau …. even Ronnie Scotts. Musically she ploughs a groove that melds soul, jazz and pop – though the emphasis is strongly on “pop”.

Hear that cocktail at its best on the set’s opener, ‘Drive Me Wild’. Ultra catchy, it was wisely chosen as the lead single. ‘Beautiful Waste Of Time’ offers more of the same. This one’s an urgent driver with great parping brass, à la Daptone and a lively sax break. It would be easy to make comparison with Amy Winehouse, but dropping Alexia’s sassy vocals over a soundscape like that and the link is inevitable. There are more Amy soundalikes on the beater, ‘Love At First Sight’ and the moody, melancholy ballad ‘Without You’. Much less derivative is the album’s other big ballad, ‘Missing You’. This one’s plaintive, dramatic and unexpected and an album highlight.

‘Promised You’d Be Here’ is another unexpected inclusion. This one goes way back to the pre-soul era and sort of mashes the old 30’s song ‘Why Not Take All Of Me’ with Jackie Wilson’s ‘Reet Petite’. Blues-based cuts like ‘I Like A Drink’ and the album’s title cut offer real variety and given the title of that title tune, there just has to be some reference to Northern soul. There are in fact two attempts to recreate the energy and spirit of “Northern”. Tunes in question are the bright and breezy ‘Dreaming’ and the jaunty ‘Mr Shady’ but though pleasant, neither quite nail the magic of real Northern soul. Modern singers and their producers need to learn that there’s more to proper Northern soul than racing beats, biting guitars, tinkling tambourines and sharp snares. There’s an indefinable element that denizens of the Twisted Wheel, the Torch, the Casino or the Blackpool Mecca can identity at 100 paces. Clearly Ms Coley and her team were never in that lucky crew. Still, they pay their honest homage to the genre and hopefully one day might discover the real thing.

In essence that’s what’s going on here. This album pays homage to soul’s golden age without being a proper a soul album. Each track has a little something of the past about it – a familiar riff, a drum roll, a melody line – but they’re infused with 21st century pop sensibilities. I guess there’s nothing wrong with that. Dear Amy W made a name for herself doing just that and who can blame Alexia C for trying more of the same.