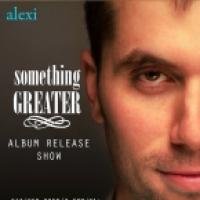 Alexi (Paraschos) is a blue-eyed soulster who works in and around Boston. His web site reveals that he discovered music when he was aged 11 -writing songs influenced by his Motown heroes and someone called Elvis Presley! However when he saw ‘Black Nativity’ he was totally smitten by the possibilities of Gospel music. He therefore began performing with his school’s Jubilee Gospel choir and while studying at Tufts University he worked with a number of Gospel ensembles. Alexi also became involved in a number of causes that campaigned against prejudice and racism. He’s currently choral director and educator at the Noble and Greenough School, piano teacher at Boston’s Butterfly Project, and keyboardist at the Myrtle Baptist Church. Alexi’s also a component part of the local secular music scene – headlining local soul music venues and playing at festivals in and around the area.

In 2011 Alexi released a single and EP; both were well received in the Bostson area and he’s now just released his first full, solo album, ‘Something Greater’. The 14 tracker is a great example of 21st century blue-eyed soul and throughout you’ll hear echoes of Mayer Hawthorne (in the retro roots of it all), Hall and Oates (in the sweet melodies) and even Justin Timberlake (in the passion and commitment of the vocals). And, given, Alexi’s background and influences it won’t surprise you to learn that the songs are a mix of gospel and secular flavours while some could fit either genre. In that sense the album’s formatting and music also reminds me a lot of Jonathan Butler’s work.

Album highlight is the rather lovely ‘Heart Of Gold’ (an original song, not the Neil Young classic). In fairness it does owe rather a lot to ‘I Believe In You And Me’ (4 Tops, Whitney and David Peaston) but midway through it takes off with a Gospel passion underlined by a rocky guitar passage. The lighter, poppy ‘Willing With You’ is another good ‘un while the ballads like ‘In Love’, ‘Here To Stay’ and ‘Enough’ would hold up on any contemporary soul set. Great lyrics on that last one too… “I’ve had enough of enough”.

The LP’s big set pieces though are the Gospel based songs – like the album’s title cut, which comes in two versions’. The first is a simple, yet dramatic builder with a big choral chorus while the second is pacier, getting into contemporary Gospel/rock territory. ‘Someday’ and ‘Carry On’ are two more “message” songs, with the latter cleverly working songs like ‘Living For The City’ and ‘What’s Going On’ into its lyrics. Check out all those lyrics and more about Alexi and his music @ www.alexisongs.com