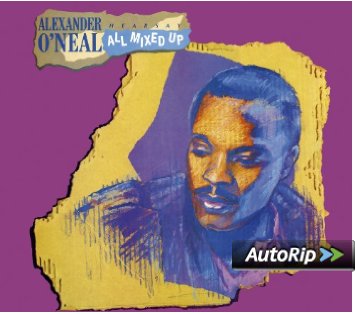 The late ’80s was when re-mixing – thanks to exciting new developments in recording studio technology, including samplers, midi-keyboards and digital editing software – really took off in a big way. In fact it’s probably true to say that record companies spent more money on remixing during those times than they did on financing the original recording sessions. On the back of Alexander O’Neal’s success with his second Tabu album, 1987’s ‘Hearsay,’ a slew of remixes was commissioned to extend the shelf life of the album and its material. What resulted was this LP featuring six tracks that appeared on the original album, all rejigged, re-configured and tweaked by such noted mix meisters as Keith Cohen and Ben Liebrand.

Some tracks, like ‘Fake’ – a slice of nasty, calloused funk on the original ‘Hearsay’ album – really benefit from being remixed; Keith Cohen transforms it into a bouncy dance groove in his House Mix. It compares favourably to Jam & Lewis’s extended remix, which is also included on the set. Cohen also reconfigures the brilliant ‘(What Can I Say) To Make You Love Me’ with his ‘Hateful Club Mix’ into a fluid dancer driven by a pulsing synth bass line. Ben Liebrand also tackles the same cut, but uses the drum loop to ‘Fake’ before introducing a dancing bass line and slivers of jazzy trumpet.

‘Criticize’ was a massive chart hit in the UK for O’Neal and Ben Liebrand’s extended remix is included here, which feeds in sampled dialogue over a pumping house-like bass line. You also get Louil Silas’s elongated retooling of ‘The Lovers,’ Flyte Time engineer Steve Hodge’s take on ‘Criticize,’ and three bonus cuts; the best of which is ‘Hitmix – The Official Bootleg Megamix’ which seamlessly segues several different cuts from the dance side of the ‘Hearsay’ album. Some remix albums from the ’80s haven’t stood the test of time particularly well but this one has some really enjoyable moments and will no doubt represent a nostalgic trip down memory lane for some listeners (this writer included).