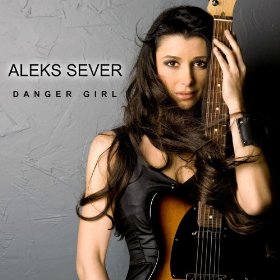 Croatian-born and raised in Germany, Aleks Sever makes music that’s so steeped in the blues idiom that it sounds like it’s authentically American. A former art student turned guitar player, Sever – who now lives in the USA – has recently been capturing ears and turning heads with her stupendous fretboard work, including those of noted guitar mavens Lee Ritenour and Buzzy Feiten. That Sever should attract the attention of high-profile axe meisters is understandable, perhaps, given that photogenic female lead guitarists playing in the blues, soul, funk and fusion fields are few and far between – but what’s really striking about Sever is that she plays with such a deep sense of soulfulness. She boasts great technique as well but she’s no mere technician, as the emotional depth of her playing on this new album reveals.

‘Danger Girl’ is Aleks Sever’s fourth long player and it’s adroitly helmed by producer, Matthew Hager, whose previous credits include studio work with Simply Red, Peter White and Mindi Abair. Sever is responsible for composing all of the set’s ten tracks, which range from muscular, horn-laden funk workouts – ‘Nightclub Art’ and the sinewy opener ‘Showtime’ are prime examples – to reflective ballads such as the lovely ‘Backstage’ and ‘Wild Love,’ whose touches of melodic lyricism demonstrate the more sensitive side of the guitarist’s musical character.

Throughout the album Sever’s sultry, blues-drenched guitar – which is reminiscent stylistically of the great Larry Carlton – is framed by some tight arrangements. There are plenty of punchy horn charts (the brass section includes Brandon Fields on saxophone) and there are also some sweetly sanctified Hammond B3 organ touches from Deron Johnson. With bassist Melvin Lee Davis and drummer Oscar Seaton (who’s played with Lionel Richie) combining to form a lock-tight rhythm section, Sever’s undoubtedly got some top drawer musicians helping to bring her musical vision to life.

Having said that, the album doesn’t quite hit the spot with every track – the set could do with a bit more light and shade in places and would benefit from some more varied musical backdrops. Nevertheless, it’s an impressive showcase for a young guitar player whose future looks very promising indeed.