AL JOHNSON; Back For More (soulmusic.com) 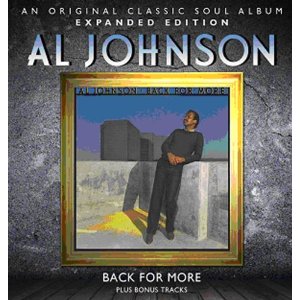 Al Johnson’s 1980 ‘I’m Back For More’ is the classic rare soul groove. It meant little on its initial release but the UK soul crowd soon espoused it and it quickly became a mainstay of soul nights the world over and it’s easy to hear why. It’s such a joyous, memorable, “up” tune and Johnson (and guest duettist, Jean Carne) absolutely nail it.

The song, though, wasn’t Al Johnson’s first stab at recording. He was a student at Washington’s famed Howard University in the mid sixties (a contemporary of Donny Hathaway, no less) and on graduating he became a member of the Unifics – whom fans of sweet harmony groups will fondly remember for their ‘Court Of Love’. After the Unifics, Al cut a solo album for the Marina label then did session work and some production for Motown (working with Tata Vega and Bloodstone). His backroom work brought him into contact with Norman Connors who won him a deal with Columbia Records and the pair set to work on an album which – on release in 1980 – was named after that soon-to-be rare groove classic ‘Back For More’. The album didn’t do too well and Al and Columbia soon went their separate ways.

That original Columbia album has been out of print for some time and now David Nathan has reissued it on his soulmusic.com label. Nathan’s lifetime in soul means he knows and understands what quality soul is all about and he acknowledges that there would be little point in reissuing the set if was just a one track album. ‘Back For More’ certainly still stands out (despite its familiarity) but the album’s seven other cuts are wonderful examples of late 70s soul. ‘Saved By The Bell’ and ‘School Of The Groove’ are punchy dancers while ‘I’ve Got My Second Wind’ is a jaunty mid-pacer. The set also boast two outstanding sweet soul ballads. ‘You’re A Different Lady’ is Johnson’s homage to Thom Bell while he claims that he wrote ‘Tonight’s The Night For Love’ in tribute to the Isley Brothers, though these ears hear more of the Spinners in it. To the LP’s original 8 tracks, Nathan has added the single versions of the cut ‘Your Are My Personal Angel’ and the classic ‘I’m Back For More’ which clocks in at one and half minutes less than the LP version. In both incarnations, the song remains a classic.