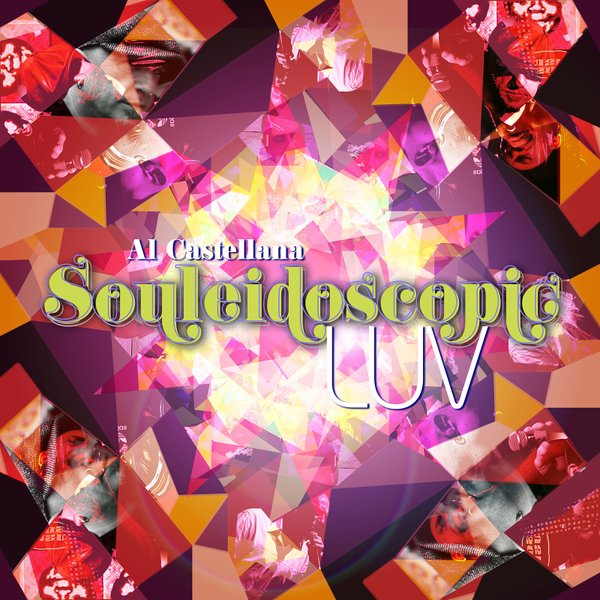 Al Castellana is every thinking soul fans’ favourite Italian blue eyed soulster (of course, we file Signor Biondi under “Jazz”). Al’s reputation was largely won via his 2013 ‘Outside My Window’ long player and since then a well chosen Stevie Wonder-penned cover, ”I Wanna Be By Your Side’, released as a single, maintained the momentum.

That little-known Stevie song is one of the highlights on ‘Souleidoscopic Luv’, our man’s brand new album. If you don’t know the particular song, it first appeared on Mr W’s then wife’s Syreeta’s 1974 debut album, ‘Stevie Wonder Presents Syreeta’. It’s a languid, building ballad and on the original Ms Wright duetted beautifully with G C Cameron. Here, obviously, Al’s GC while the Syreeta part is taken by UK song bird Bashiyra. It’s a reverential cover (I mean, who’d take too many liberties with a Stevie song?) and sets the down tempo mood for much of the rest of the album.

Yes, ‘Souleidoscopic Luv’ is an unashamed romantic collection and I guess the album’s theme (the cover art suggests this too) is to show romantic love in all its varied aspects and amongst the set’s 12 tracks there’s something for every lurve mood. At the moment, we’re liking ‘Suzie Smile’ – a smouldering 80s style Quiet Storm kind of thing. Al’s voice is properly pleading and there’s a lovely harmonic hook running through things. ‘Say You Love’ me is another winner. It’s a little more complex than many of the other cuts and Al’s frail falsetto shines…. shades of the great Philly tenors, even dear old Eddie Kendricks or Ron Tyson. ‘Be Mine’ is another big ballad – collectors will know this from its inclusion on a ‘So Soulful’ compilation from last year.

Collectors will also know ‘A Man Like Me’. This was released a single earlier this year and it’s more mid-tempo than balladic… a decent modern soul cut. ‘Sunday’ is another that’s just a shade too up to be called a ballad, but it’s still stately. The LP’s title tune is about as brisk as it gets…. busy and bustling, like many of the album’s cuts it boasts a catchy little harmonic hook… the kind that the modern soul crowd love for the retro tingle it creates. Investigate ‘Souleidoscopic Luv’ and you’ll enjoy many more such tingles!