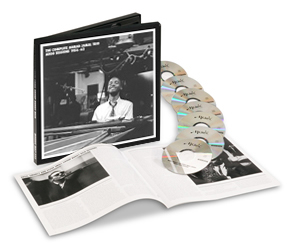 There’s nothing in jazz quite as beautiful or enchanting as the crystalline sound of Ahmad Jamal’s piano. Characterised by delicate, glistening filigrees of melody underpinned by subtly nuanced chords, Jamal brought a new sensibility and approach to jazz piano playing when he started recording in the 1950s. Back then, Jamal – who was originally born Fritz Jones but changed his name when he adopted the Islamic faith in 1952 – cast a spell on many musicians, including Miles Davis, who claimed that the Pittsburgh-born pianist exerted a powerful influence on his own musical style, especially in regard to his use of space. Indeed, Miles frequently borrowed tunes and ideas from Jamal’s’ repertoire and even famously covered the pianist’s ‘New Rhumba’ on his classic 1957 Gil Evans-arranged LP, ‘Miles Ahead.’ Jamal’s original version appeared on the Argo LP, ‘Chamber Music Of The Jazz’ in 1955, when the pianist led a drum-less trio that included Ray Crawford on guitar. In 1956, though, Jamal, brought in a drummer (Walter Perkins, who was replaced after one LP by the distinctive Vernel Fournier), dropped the guitar and helped establish the piano/bass/drums line up as the standard configuration for the jazz trio.

Just released on Mosaic – producer Michael Cuscuna’s specialist label for jazz connoisseurs – is a truly fabulous box set that focuses on the Jamal trio’s oeuvre for Argo, the jazz imprint of Chicago’s legendary Chess label. Comprising 129 tracks distributed over 9 CDs, it’s a colossal package (it’s also been five years in the making) and as well as including all twelve of Jamal’s Argo albums recorded during the period 1956-1962, it includes a raft of previously unreleased tracks (23 in all). The set reaffirms what an extraordinarily gifted pianist Jamal is (he’s still alive – he was 70 earlier this year). His touch here is sublime and he manages to marry delicacy and elegance with precision and still communicate a sense of emotional depth. There are countless highlights here, among them ‘Volga Boatman’ – Jamal’s imaginative arrangement of a Russian folk song -‘Poinciana’ (a live version of the tune taken from the best selling album ‘But For Me’ recorded at Chicago’s Pershing Lounge), and ‘Surrey With The Fringe On Top.’ Even though there are a few original tunes scattered throughout the album (like the classic ‘Ahmad’s Blues’) what’s most striking is Jamal’s facility to take a piece written by someone else and transform it completely by filtering it though his own musical personality.

In terms of newly-discovered material, many are live cuts but there are also a clutch of rare studio cuts – including Cole Porter’s ‘Love For Sale’ and a nicely grooving rendition of Irving Berlin’s ‘Cheek To Cheek,’ the latter illustrating Jamal’s penchant for extreme dynamics, with the music switching from fortissimo to pianissimo at the drop of a hat. As with all Mosaic box sets, the Jamal set is a strictly limited edition item (only 5,000 will be manufactured) and is packaged in an LP-sized box complete with a large booklet packed with the kind of esoteric discographical minutiae that will please jazz anoraks. The best thing about the booklet, though, is Kenny Washington’s lengthy interview with Ahmad Jamal, who got involved in the project by providing some rare photos and giving his approval to the unreleased material.

Priced at $149 (and available only from www.mosaicrecords.com) the Ahmad Jamal box set might seem expensive to some but then Mosaic – who put a lot of love and dedication into their projects – are only targeting really serious collectors. And as any collector knows, a Mosaic box set is a serious investment that actually appreciates in value over time (indeed, out-of-print Mosaic boxes go for ridiculous prices at places like eBay). With that in mind, then, ‘The Complete Ahmad Jamal Trio Argo Sessions 1956-62’ is in actual fact a bona fide bargain. Get it now before it’s gone forever.