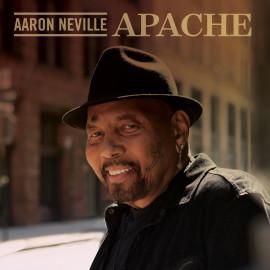 With his seraphic falsetto tone and liquid, melismatic phrasing, New Orleans soul meister, Aaron Neville, possesses one of the most recognizable voices in R&B. In a long and winding career – which began back in 1960 – Neville has found most success singing ballads, of which he is a Grammy-winning, crossover master.  After 2013’s doo-wop flavored ‘My True Story’ for Blue Note, helmed by Don Was and Rolling Stone, Keith Richards, the veteran singer returns on a new label with a freshly-minted platter produced by Eric Krasno, who’s previously worked with Ledisi, Norah Jones, Chaka Khan and the Tedeschi Trucks Band.

‘Apache’ turns out to be a revelation. It finds Neville in a grittier mode than some of his previous outings. His voice remains a mesmerizingly beautiful thing to behold but it’s framed by some tougher grooves and funkier arrangements than his mainstream fans have come to expect. The opener, ‘Be Your Man,’ sounds like something from the Blaxploitation era with its churning wah-wah guitar-driven groove and stabbing horns. By contrast, ‘All Of The Above,’ which is even better, slows things down to a strutting, Crescent City simmer and is autobiographical reflection of his New Orleans roots (apparently some of the tracks on the album are Neville’s poetry set to music). Elsewhere, he revisits the love song ‘Orchid In The Storm,’ a track he’d previously recorded with the late Joel Dorn at the helm in the 1980s, but here it’s given a widescreen treatment with horns and flutes. Neville then takes us to church with the gospel-infused, waltz-time ballad, ‘Heaven,’  which is the perfect vehicle to showcase his sanctified pipes.

‘Hard To Believe’ channels the loping groove of Neville’s ’70s classic, ‘Hercules,’ while ‘Ain’t Gonna Judge’ is harder-edged and more strident featuring loud brass and a declamatory vocal. The mid-tempo pop-soul hybrid, ‘I Wanna Love You,’ finds the Big Easy singer in a more relaxed mood and ‘Sarah Ann’ has a vintage rhythm and blues feel that resonates like an old Sam Cooke 45. ‘Make Your Momma Cry’ is different again; a ‘told you so’ portrait of a troubled individual who lifestyle is destined to cause grief. The musical backdrop to Neville’s narrative is both hypnotic and undulating.

The album’s coda is ‘Fragile World,’ which finds Neville reciting one of his poems over a jazz-tinged, funkafied groove. It’s an absorbing and sincere meditation on the world’s ills though its tone is positive rather than pessimistic; its theme is achieving peace and togetherness. It brings the curtain down on what is undoubtedly one of Aaron Neville’s most satisfying and varied albums in recent years. Not bad for a man who will be seventy-six-years-old in January.