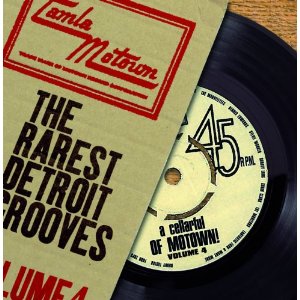 It’s been a good three years since the last helping of previously unreleased Motown rarities which might indicate that the vault is, at last, drying up. We don’t really know and the compilers and execs are keeping tight lipped – but what we can be sure of is that the quality of this “new” music remains consistently high, once again begging the question why, oh why it has remained in cold store for so, so long. Amongst the big 50 cuts there are plenty of big, big names – The Temptations, The Four Tops, Gladys Knight and the Pips, Smokey and The Miracles, David Ruffin, Marvin Gaye and Stevie Wonder amongst them. The Stevie song – the tuneful ‘Why Don’t You Come Home’ – dates from 1968, and is quite superb – the equal of any his contemporary bone fide releases. Gaye fans get a brace of “new” recordings. ‘Your Kiss Kiss’ is a duet with Oma Heard and though bootlegged versions have been around for a time, this re-mastered cut is high on quality as is the man’s 1963 cut ‘Three Time Loser’ (with the Vandellas on backing vocals). There’s also lots from Motown’s second stringers like the Fantastic Four, the Monitors, Chuck Jackson, the Originals, Shorty Long, the Contours and the Spinners. As ever, though, the best thing about this album is the unearthing of great cuts from almost unheard of artists like the Blackberries, the Vows, the Versatones, the Lollipops, sometime Artistic Robert Dobyne and Debbie Dean. Interestingly, a lot of the music here is a tad more down-tempo than the stuff featured on the first three volumes in the series – but, for me, that’s a bonus when we’re treated to stuff like David Ruffin’s sensational ‘In The Cool Of The Night’ and the supper club flavours of Brenda Holloway’s ‘Little Miss Lonely’ and Barbara Mc Nair’s ‘The Real You’. As interesting (especially to Motown anoraks) is the fact that a lot of the cuts (particularly the backing tracks) were recorded at Motown’s California outpost. Clearly with so much music outsourced like this, it shows just how busy the Detroit Snakepit was in its heyday – practically being used round the clock, churning out classic after classic. With such an output, it’s clear that there’s lots, lots more to come from that huge archive. Here’s hoping we’re not left waiting another three years to hear it.