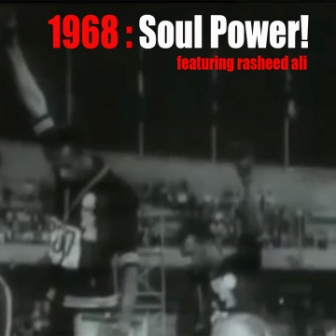 Soul Power is the brain child of Rasheed Ali and this ambitious 18 tracker is a serious attempt to go back in time to create a music that gives new life to black history. Clearly the focus of his project is 1968 – a pivotal year in American history. It was the era of the Black Panthers, Civil Rights agitation, Klu Klux Klan retaliation, urban unrest, the Vietnam War and, tragically, the year that Martin Luther King was assassinated at the Lorraine Motel in Memphis.

And it’s archive radio news reports about the assassination that starts the album off –setting the tone in the most uncompromising of ways. What follows are some of the most biting and perceptive commentaries on what life was like for Afro-Americans as the 60s morphed into the 70s. Song titles like ‘Down With The Programme’, ‘Up In Smoke’, ‘Burn Baby Burn’ and ‘Vietnam,’ need little explanation. Though the most telling comments come in ‘Twenty Four Seven’. The theme is how liberals might embrace black culture and (rightly) support the Civil Rights movement “but they don’t know jack about what it’s like to be black, 24/7”.

To hammer home his messages, Rasheed crafts a music that is as authentically “1968” as anything any other modern musician has created. His musical sources are obvious…. Sly Stone, James Brown, Norman Whitfield and various lesser luminaries of the movement. Many of those sources are credited (maybe obliquely) in ‘Psychedelic’… all the above-mentioned but also the Beatles, Jimi Hendrix and the Doors. Even the ‘Dr Strangelove’ movie gets a creditable name check. Clever stuff, and it magically makes the message that more meaningful and sonically authentic.

Other tunes worth checking are ‘Float Like a Butterfly’ (a wonderful tribute to Muhammad Ali) and the snappy ‘Student Revolution’. In both you’ll hear the sparse funk of James Brown married to the inventiveness of Norman Whitfield and garnished with the occasional Sly Stone flourish.

Those flavours form the dominant sound palette, though the album includes two less urgent items… ‘Not My Baby’ and ‘Out Of Sight’, The former is a cool, mid-tempo meander (it offers a nod to the Maxine Brown classic) with a clever love triangle story while the latter is a lovely, languid summer groove.

Find out more about this album @ www.facebook.com/1968SoulPower