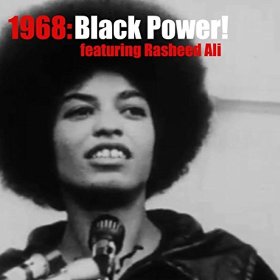 By common consent one of last year’s best proper soul albums was ‘1968 Soul Power’. Crafted by New Yorker Rasheed Ali, the long player was an uncompromising exploration of issues that affected Afro-Americans in the late 60s/early 70s… the era of the Black Panthers, Civil Rights agitation, Klu Klux Klan retaliation, urban unrest and the Vietnam War. Rasheed choose 1968 as the focus because that was the year when Martin Luther King was tragically assassinated at the Lorraine Motel in Memphis and because the contemporary, dominant forces in urban black music – people like James Brown, Norman Whitfield and Sly Stone used a musical palette that helped explain, explore and/or discredit many of those key issues and then-current affairs. Rasheed, playing most of the instruments himself, authentically replicated the sounds of 1968 and in doing so he made the message in his music that much more relevant.

On the release of the album, Rasheed told us (see our in-depth Rasheed Ali interview in our interview archive) that the set was the first part of a trilogy and at last the eagerly awaited second part of master work has become available. A superficial listen to the set will reveal that Rasheed’s soundscape has altered just a tad. Where ‘Soul Power’ was mainly hard, driving funk, ‘Black Power’ has a more subtle, textured sound. Generally it’s mellower and in places a little smoother. Indeed on one of the tunes, ‘In My World’, Rasheed exhorts us to “Keep it smooth” and helps create that feeling with some laid-back vibes and a garnish of lovely brass riffing. Whatever, the tune’s a beguiling, hypnotic groove and that hypnotic quality is repeated throughout the album… witness ‘Tell Me You’re Not Sleeping’, ‘Right On’ or indeed any of the 18 tracks.

Though the music may be a little different here, the message in that music is still there, though again there is a subtle difference. Where volume 1 explored what we could call “bigger issues”, this new set challenges us to explore more personal issues. On songs like ‘Dark Skin Girl’ and the aforementioned ‘In My World’ the inference is that we should be proud of our roots and heritage; ‘Family’ (an album highlight, by the way) speaks for itself; ‘Fly Like A Bird’ urges us to free our minds (yes, the rest will follow) from the shackles of outside-imposed restrictions and prejudices… we’re all free; we just need to realise it! Like the whole of the album it’s properly liberating music.