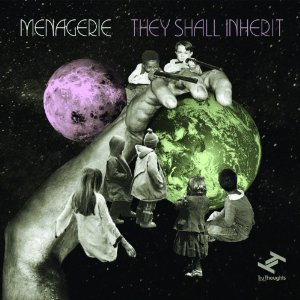 MENAGERIE is the latest project from prolific Aussie muso, LANCE FERGUSON. FERGUSON, of course, is one of the main men in antipodean soul and funk outfit, THE BAMBOOS. He also works on his own using the LANU alias. In that alter ego he records in his own right, produces other artists and remixes music in his own idiosyncratic way.

To flesh out his latest musical ideas, FERGUSON has put together a studio ensemble which he’s dubbed MENAGERIE. In this musical zoo are people like top Aussie sax technician PHILIP NOY and keyboardist MARK FITZGIBBON – a veteran of the London jazz dance scene of the 80s. Together they’ve tried to recreate the spiritual jazz that made labels like Tribe, Strata East and Black Jazz famous back in the day… though FERGUSON will be quick to insist that he’s given it all a 21st century twist.

MENAGERIE’S album is called ‘They Shall Inherit’ – a reference to the aspirations FERGUSON has for his children – and the music is a far cry from the BAMBOOS signature sound. Highlight on the 6 tracker is the atmospheric ‘Leroy And The Lion’ – on which vibes maestro ROY AYERS guests. Listen up too to the spoken word piece ‘The Quietening’ – a real, retro rumbler.

MENAGERIE’S ‘They Shall Inherit’ is released on Tru Thoughts on Dec 10th.