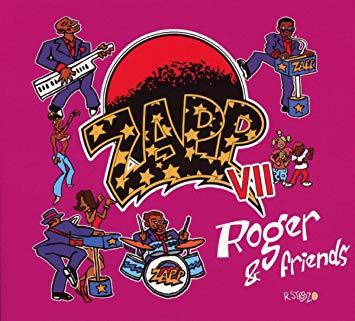 Wow … here’s a real blast from the past … a new album from proto, electro funksters ZAPP! It was back in 1978 (!!!) that four Dayton brothers -Roger, Larry, Lester and Terry Troutman formed Zapp and two years later their debut long player (with production input from Boosty Collins and George Clinton) went gold while the classic single ‘More Bounce To The Ounce’ went on to be one of the most sampled tunes of all times (600 samples, we’re told).

Zapp and the Troutmans became quasi hip-hop idols and their music was a treasure trove for sample seekers. Roger T in particular was hugely active in the classic hip-hop era, winning a Grammy nomination for his role in Tupac’s ‘California Love’ in 1997. Sadly two years later, Roger died and the band was stunned. In 2001 Zapp regrouped and released ‘Zapp VI… Back By Popular Demand’ and started touring again.

Now forty years since their inception Zapp have released a brand new long player – ‘Zapp VII… Roger and Friends’ – a heartfelt but never mawkish tribute to Roger. The 12 tracker is stuffed with classic Zapp talk box and synth lines. The album has an impressive guest list too – appearing are people like Mr Talkbox, Tuxedo, Snoop Dogg, Kurupt and even Roger Troutman. Using old demos and digital trickery, he can be heard on ‘Red And Dollars’ and the lovely ballad ‘Angel’ while his spoken voice is heard on ‘Zapp And Roger’ – explaining his “discovery” of the talkbox.

Lester Troutman Jr says of the new album: “This group has always been about three things… hook ’em, get ’em dancing and keep ’em dancing. And I honestly think the secret to Zapp ahs always been its authenticity. They genuinely want to make you get up and really dance and just forget about all your trouble”.

ZAPP; Zapp VII… Roger and Friend is out on October 26t on Leopard Records.