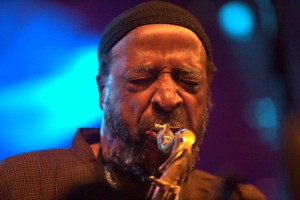 Lateef was born William Huddleston in Chattanooga, Tennessee in 1920 but his family relocated to Detroit in 1925 where as a teenager he immersed himself in the big band scene, taking up the saxophone. He went on to play with some big names – including Roy Eldridge, Ernie Fields and Dizzy Gillespie but when his wife became gravely ill he quit music to look after her, taking a job in the Chrysler car plant to make some money. Those experiences had a profound spiritual impact on him and he embraced Islam when he learned that amongst its key tenets was the obligation to care for your family.

He changed his name to Yusef Lateef and enrolled at Wayne State University but music continued to call and he made his first recording as a leader in 1956. In 1960 he moved to New York to work with Charlie Mingus while still pursuing his own solo career – recording solo albums playing sax, flute, oboe, bassoon and a range of Eastern instruments. A pioneer of fusing world music with jazz, he continued to study music and was awarded a masters Degree in 1970 at the Manhattan Music School, where he also taught – running classes in what he called “autophysiopsychic music“. A Music Doctorate followed and between 1981 and 1985 he worked at a Nigerian University, retuning to take up a teaching post at the University of Massachusetts.

Through all this Lateef continued to record and perform (though he refused to work in nightclubs, which he described as “obnoxious”). He recorded over 100 albums, receiving a Grammy in 1987 for ‘Yusef Lateef’s Little Symphony’. He also wrote short stories and was an acclaimed painter. Lateef remained a devout Muslim and saw no conflict between his religion and career, claiming, “My music is, like my religion, supposed to take you from this life to the next”.

Yusef Lateef is survived by his second wife and a son. His first wife and two children predeceased him.