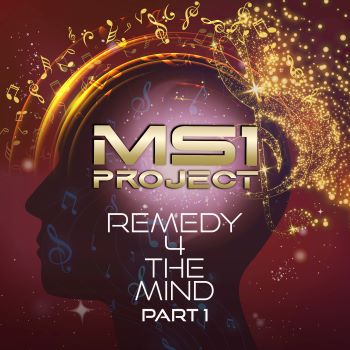 We first got to know  of MS1 PROJECT back in 2017. We learned that the UK band consisted of two UK brothers … MIKE HARRISON (aka DJ Blue) and session musician GEORGE HARRISON. In 2017 they released two singles –  ‘The Summer Song’ and the lovely old school flavoured ‘Sugar Me Sugar You’. The MS1 boys then went on to work with Shaila Prospere on her ‘Rise’ winner.

Their own debut album, ‘Change’ was released in November 2019. It spawned the popular ‘Steal A Kiss’ (which featured Shaila Prospere) and ‘Heavenly’. Now the Harrison brothers have just released their second album, ‘Remedy For The Mind, Part 1’ and it carries on where ‘Change’ left off. That’s to say the 10 tracker offers a classy set of Brit soul with plenty of variety – both in tempo and mood but also in delivery. You see, the Harrison team is well placed to call on plenty of talented names to help them deliver their ideas.

The tune that’s winning plenty of attention right now is ‘Is That Enough;. This is a soulful mid-tempo groove with sweet and beguiling vocal from Destiny. It’s the album’s opener and it gets things off to a great start. ‘Life’s Celebration’ is another pleasing mid-tempo soul groove – classic Brit soul. Vocalist on this one is Rachell Crayton. If you fancy something a little more up-tempo there’s ‘You Got The Love’. Featuring vocals from Seta, this was one the album-heralding singles. The other was  the R&B flavoured ‘Start Me Up’. This features regular collaborator Jerome Vintage and comes in its original format and a “smoothed out” mix.

Mr Vintage also fronts ‘From Me 2 U’ – a sweet ballad in the modern soul group idiom. For those who like things a little more sensual, there’s the 2 mixes of the ethereal ‘Survival’ (Seta on lead vocals), ‘Rainbow Skies’ (featuring Bérénice) and ‘Body Like Dat’ (Josie Fountain at the mic).

So, yes, plenty of quality soul and variety on ‘Remedy For The Mind, Part 1’ and that ‘…Part 1’ is intriguing – clearly more to come…looking forward to it. This year we’ve enjoyed some first rate Brit soul – the Down To Earth album springs to mind; now MS1 Project’s ‘Remedy For The Mind, Part 1’ joins the select list of 2021’s best! It’s out now – oh and that name … “MS1 Project! – we’re told it stands for “Music Street One”… so now you know!