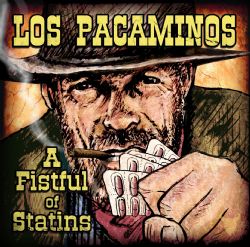 Without doubt he was one of the UK’s best ever blue-eyed soul singers. Yes, PAUL YOUNG, a great vocalist, who quit the soul show band Q-Tips to launch a solo career with a creditable version of Marvin Gaye’s ‘Wherever I Lay My Hat’. More hits followed but as is the way, the hits soon dried up as public tastes moved on. Paul, though, still makes a decent living on the oldies circuit and can probably be found on a 80s revival package show somewhere near you right now.

Committed Paul Young fans know that our man has a musical alter ego – one that he clearly relishes and cherishes. Paul, you see, is a fully-paid up member of UK Tex Mex/Americana combo LOS PACAMINOS. Paul put the band together a few years back with a bunch of musical mates who love the country flavoured/ Mexican tinged sound of the Texas borderlands.

LOS PACAMINOS are essentially a seven piece. Paul plays guitar and shares vocals; Jamie Moses and Drew Barfield are the two other guitarists and both sing too; Matt Irving plays keys, accordion and is yet another fine vocalist; Melvin Duffy is responsible for the signature pedal steel and dobro sound; Steve Greetham is the bassist; Mark Pinder plays drums.

The band has just released their latest long player. With the tongue-in-cheek title ‘A Fistful Of Statins’, it perfectly sums up the sound of Los Pacaminos. It features Tex-Mex flavoured rockers like ‘Don’t Make Me Wait Senorita’ and poignant country ballads like ‘A Little love’ and all kinds of everything in between. What’s clear is the band love what they’re doing. They inject a proper sense of fun into their music and if you’ve caught their live shows you’ll understand what I mean by fun… even this album title and its cover art work shows the band’s irreverence.

LOS PACAMINOS: ‘A Fistful of Stations’ is out now on Cherry Red Records.