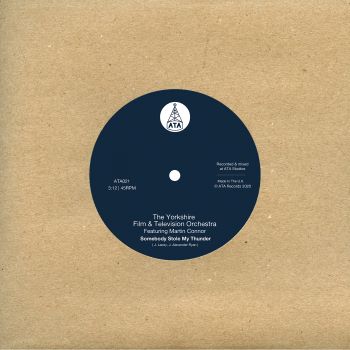 ATA RECORDS is based up there in Leeds and was set up by musicians Pete Williams and Neil Innes in 2014. Recording exclusively to 2” tape and adopting mid-century recording techniques has resulted in a distinctive “ATA sound”. And their music from artists like Abstract Orchestra, The Lewis Express, The Sorcerers and Tony Burkill has enjoyed a cult following.

The label’s latest release is a 7” single which pairs ‘Somebody Stole My Thunder’ by The Yorkshire Film And Television Orchestra featuring vocalist Martin Connor with ‘I Have Who Have Nothing’ from Rachel Modest. Both are old recordings but are being released due to demand. ‘Thunder’ is probably best known in its Georgie Fame version which back in the day was something of a mod anthem while the dramatic ‘Nothing’, of course, has been covered numerous times.

The single is out now on limited 7” with 100 transparent blue pressings available exclusively on the ATA website and Bandcamp. Download and streaming is also available via the usual platforms.