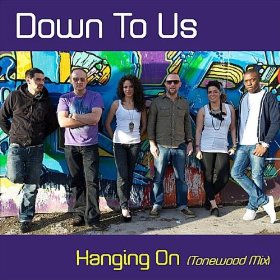 Collectors of eclectic modern soul grooves will fondly remember a lovely, summery 2009 tune from JUDDERRBASS called ‘Everybody Knows’. The band was the brainchild of Liverpool-based musician GEORGE McSHANE and the cut first appeared on PHIL DRIVER’S second Soul Unsigned compilation.

Well, the good news is that GEORGE has hooked up again with PHIL and with an outfit named DOWN TO US, he’s just released another excellent tune called ‘Hanging On’. It’s a sweet and sophisticated mid-tempo item that though totally original has the feel of both JAMIROQUAI and DRIZABONE about it, while there’s also a Freudian link to the classic LOOSE ENDS almost similarly named classic. We really couldn’t offer more recommendation that that now, could we? But, in truth the song’s annoyingly catchy and it’s currently available as a download only single. You can find out more by going to www.soulunsigned.com