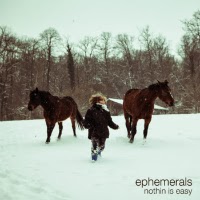 Last year we featured a great UK funk album from Hannah Williams and the Tastemakers. Their ‘Hill Of Feathers’ was a hard hitting funk ten tracker and won support from some of soul’s top tastemakers (yes… pun intended!) including Craig Charles. Hannah’s chief collaborator and main man in the Tastemakers was guitarist Hillman Mondegreen who’s now embarked on an equally ambitious and decidedly worthy musical project with a band called THE EPHEMERALS.

Hillman’s chief collaborator in the Ephemerals is Keke Mokoro and to help them deliver their musical ideas they recruited Franglo-American singer Wolfgang Valbrun. After meeting Wolfgang at a French tour date, Hillman set about reworking a half-sketched album originally intended for Hannah Williams. The entire album was rehearsed and recorded (live to tape) in just 3 days at London’s analog Cowshed studio and on the fourth day backing vocals and strings were added.

The result is a gritty, raw organic soul album called ‘Nothin’ Is Easy’. The music is very contemporary – real modern soul, if you would, (shades, naturally, of the Tastemakers and people like Amy Winehouse, Antoney Wright… even Jay Kay) but it’s all definitely rooted in old school soul with its beefy, brass riffs and bluesy arrangements. Hear to best effect on the laid back ‘Things’ or the bigger sounding ‘You Made Us Change’. Elsewhere, ‘Six Days A Week’ colours its palette with classic blues while ‘The Oligarch’ is a big slab of soul-jazz.

The music on ‘Nothin’ Is Easy’ is never less than interesting, but what is equally intriguing is the business plan behind that music and the band itself. Hillman Mondegreen’s aim is to democratize recorded music by allowing anybody to download his entire album for free from the facebook.com/ephemeralsnothe page. For artefact collectors (those who like “real” music) though, there’s a special vinyl edition of the album available via Beat Delete. It’s loaded with exclusive content; – the vinyl itself features a 7 minute version of ‘Things’ and an extended edit of ‘I’m Your Man’ that are abridged on the free download. An mp3 voucher that comes only with purchase of the vinyl includes the unfaded edits of all songs, plus instrumental versions of every song and a remix by Jimi Needles.

Intrigued? Then go to www.facebook.com/ephemeralsnothe