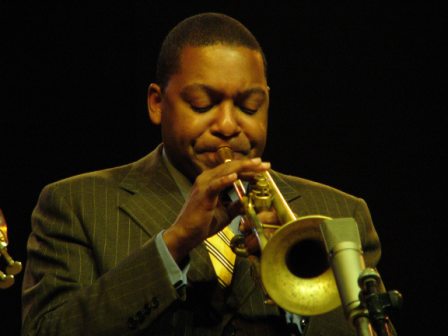 Tickets for WYNTON MARSALIS’ upcoming three night (six show) run at London’s Ronnie Scott’s Club in late July sold out in a matter of hours. So, with demand for tickets to see the legendary trumpeter, band leader and cultural champion far out-stripping demand, the club has decided to launch a new venture – live streaming of the show!

In a first for the iconic Soho club, WYNTON’S show on Tuesday 23rd July is to be broadcast live to a potential audience of millions around the world. Thanks to the power of the internet and a ground breaking partnership with Panasonic, a world-wide audience will be given the opportunity to experience the atmosphere of this legendary venue, and to enjoy the performance of one of jazz’s true stars…. all in stunning HD.

SIMON COOKE, the club’s Managing Director, explains:”We are keen to give those who can’t make the journey into London’s Soho, people too far away or simply those who can’t get a ticket the opportunity to enjoy the Ronnie Scott’s magic for themselves and we are delighted that an artist of WYNTON’S stature, arguably the most influential jazz musician of the last forty years, has agreed to feature in our very first broadcast from the club.”

Access to this very special broadcast is free. Viewers will simply need to log onto the club’s website www.ronniescotts.co.uk at 10.30pm BST on Tuesday 23rd July.