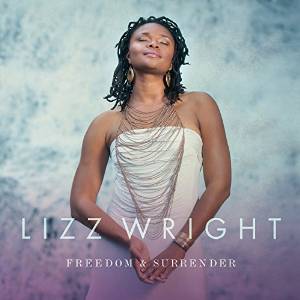 It’s been a long five years but acclaimed jazz chanteuse, LIZ WRIGHT is all set to release a brand new album. Her debut on Concord Records, ‘Freedom And Surrender’ will be hitting the sales racks at the start of September.

For the album, Ms Wright enlisted four times Grammy winner Larry Klein as producer and at first the duo decided they’d record an album of covers. As time went on, however, the album became a collection of mostly originals and to help deliver they drafted in an A Team of support players. On the set, there’s drummer Vinnie Colaiuta, bassist Dan Lutz, guitarists Dean Parks and Jesse Harris and keyboardists Kenny Banks, Peter Kuzma and Billy Childs.

The biggest coup, though, was to call on the services of a certain Gregory Porter. The Cat In The Hat adds his distinctive tones to a mesmerising slow jam, ‘Right Where You Are’. It’s soul perfection and set to be one of this autumn’s big tunes.

Other album highlights include ‘Lean In’ (which seems to draw inspiration from those great Marvin Gaye/Leon ware collaborations) and a cover of the Bee Gees’ ‘To Love Somebody’…. a song retained from the original concept.

Liz Wright’s ‘Freedom And Surrender’ is released on Concord Records on September 4th and there’ll be a full review here @ SJF very soon.