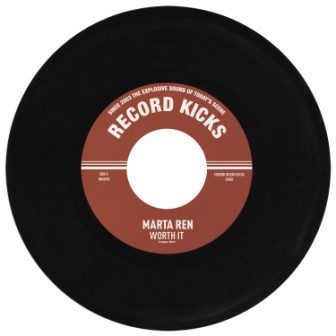 Marta Ren is Portugal’s premier soul singer. She’s been in the business since the 90s and her 2016 album, ‘Stop Look Listen’ turned a few heads – breaking Ms R to a wider audience than just in her native Portugal.

She’s working on the all-important follow up and the first single is about to be unleashed – the right word, ‘cos ‘Worth It’ is a powerful blaster of a tune!

‘Worth It’ has been mixed and produced in London by hit making producer and engineer Emre Ramazanoglu who in his 20 years career has garnered an impressive résumé working closely with folk like Mark Ronson, Lily Allen, Kylie Minogue and Noel Gallagher on his latest album ‘Who Built The Moon?’. ‘Worth It’ is a mix of soul and 60s rock – just right for Marta’s powerful voice… a kind of Janis Joplin thing going on here! It’s out on June 7th on Record Kicks.