WORKING IN THE COLEMINE… 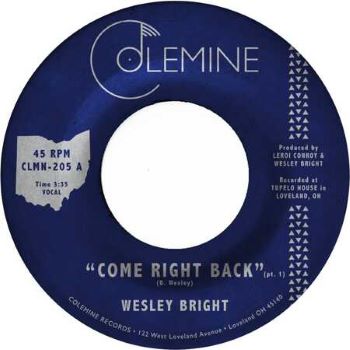 Hot on the heels of the wonderful Oliver James single, ‘One And Only’, COLEMINE RECORDS have lined up three more quirky and intriguing  soul singles – all heralding albums from the various artists.

First up there’s a shifty, moody ‘Come Right Back’ from Ohio singer WESLEY BRIGHT. Bright began his career in Akron fronting the Honeytones but now, it seems, he’s breaking out on his own. His ‘Come Right Back’ is an atmospheric piece which we’re told was inspired by the music of the Wu Tang Clan but it eventually took on a 7 minute life of its own! Like many epic soul singles of yesteryear, ‘Come Right Back’ comes in parts 1 and 2. A collaboration with Leroi Conroy, the 7” comes in limited edition red vinyl. Wesley also has an  upcoming album, ‘Must Be The Love’.

KELLY FINNIGAN’S band, THE MONOPHONICS will be releasing their fifth album, ‘Sage Motel’ in May but while we wait, they launch their LP’s first single, ‘Warpaint’ on 15th March. It’s big and bold, a sort of rock/soul hybrid. Full of urgency and tension, its organic sound will delight the band’s growing legion of fans.

San Diego-based instrumental combo, the SURE FIRE SOUL ENSEMBLE have just released the first single from their upcoming album. The LP (due April) is ‘Step Down’ while the single is ‘The Other Side’, a rumbling, organic soulful workout . The band claim that the tune’s heavy vibe reflects the times we live in. Heavy indeed!