WORKIN’ ON THE FAME GANG! 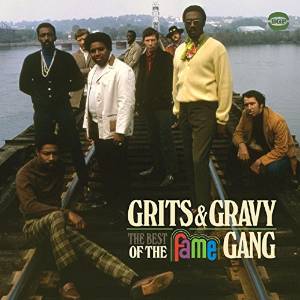 Most successful soul labels had their own in-house studio band and serious soul collectors can reel off the musicians who played for labels like Motown, Stax, Hi and Chess. Rick Hall’s famous Fame label – based down deep in Muscle Shoals – had its own team of players too giving the product crafted in the East Avalon Avenue studio a very special soul cachet. For all kinds of reasons though Hall used three different teams of players who, over the years, became known as The Fame Gang.

The first “Gang” (Terry Thompson, Jerry Harrigan, David Briggs et al) helped establish Fame’s credentials in the early ’60s but they were soon lured to Nashville and bigger pay cheques. Arguably the band that followed was Fame’s most illustrious crew – Roger Hawkins, Jimmy Johnson, Junior Lowe, David Hood, Spooner Oldham, and Barry Becket. Their notoriety became such that after five years with Hall they broke away and set up their own studios – Muscle Shoals Sound.

In studio down time, the sessioneers would frequently jam – often with the tapes rolling and in 1969 Hall released a single on them ‘Grits And Gravy’/’Soul Feud’. The single did nothing but Hall decided to give the band an album. Entitled ‘Solid Gold From Muscle Shoals’, it was essentially an assembly of instrumental covers of recent hits like Tyrone Davis’ ‘Can I Change My Mind’ and Glen Campbell’s ‘Wichita Lineman’. The long player bombed but now Ace Records’ BGP imprint has resurrected some of the tracks as part of 25 retrospective on the Fame Gang.

‘GRITS AND GRAVY: THE BEST OF THE FAME GANG’ features some of the funkier and more soulful items from the album (‘Choice Of Colours’ and ‘It’s Your Thing’ amongst them) along with the single’s tunes and adds a plethora of unreleased tracks including versions of ‘Cantaloupe Island’ and ’25 Miles’ and plenty of original material. Musically, it’s not a million miles away from the sound of Booker T and the MGs but Southern soul collectors will be delighted to have access to much long-neglected material. The album is out now.