WORKIN’ IN THE LAB … 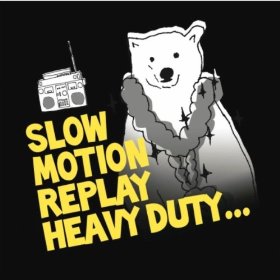 The recent release on WEELAND and the URBAN SOUL COLLECTIVE (see our reviews pages) has just started to make waves on the underground soul scene. It’s out on French label, SOUL LAB who are currently running with two other interesting releases. First up there’s ‘Heavy Duty’ from SLOW MOTION REPLAY. The outfit hail from Japan and at its core are KENICHI YANAI, SHINAYA KUSUMOTO and TAKUYA ISHIBASHI – all big “names” on the Japanese groove scene. Their music’s a laid back mix of nu soul and jazz with hints of chill and Latin about it. Check out the soporific ‘Terminal Station’, the Sergio Mendes-esque ‘Wam’ and the soul filled ‘Tell Me A Bedtime Story’ which features an great vocal from Leslie Carter.

Soul Lab’s second newie is ‘Eye See’ from new Zealander, ISAAC AESILI. AESILI’S a classically-trained trumpet player with a passion for soul, funk and reggae and the LP’s a mix of all that and more. Soul folk might find it a little heavy on the electronic instrumentation but the 17 tracker boasts a number of interesting cuts which AESILI offers as a counter voice to the glorification and idealisation of the gangster cultures so often promoted by commercial R&B.

Find out more on these album @ www.soulab.com