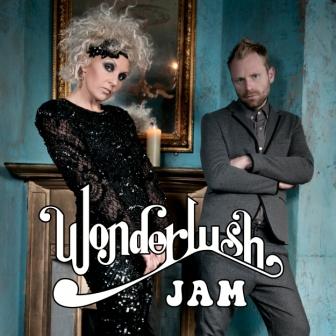 The enigmatically named Punkpappa and a certain Ms Evers make up a new, glamorous electro funk duo by the name of WONDERLUSH. We’re told that the pair are “two star blazed electronic soul pilgrims”. In real life, Punkpappa is a top session bassist who’s played with the likes of Jocelyn Brown, Robert Plant, JTQ, Light of the World and Courtney Pine. Ms Evers has sung for numerous house units and is known of the scene for her big performances and even bigger hair!

The duo are about to unleash their debut album but in the meantime they’re going with a second single –the jumpy, bassy ‘Jam’. Listening, it’s easy to hear where they’re coming from. The cut is a huge cocktail of all things P Funk with a generous slurp of Prince and a dash of Philly outfit Instant Funk on the side. Punkpappa’s bass line is straight out of the Larry Graham textbook. Ms Evers’ vocal is suitably vague and enigmatic and I guess the best thing we can say is that good old George Clinton would be proud of it!

The tune is already attracting the attention of tastemakers like Craig Charles and Snowboy and if this kind of funk’s you’re thing you’ll be delighted to learn that the single’s B-side, ‘Swag’ (which, confusingly was Wonderlush’s first single!) offers lots more of the same.