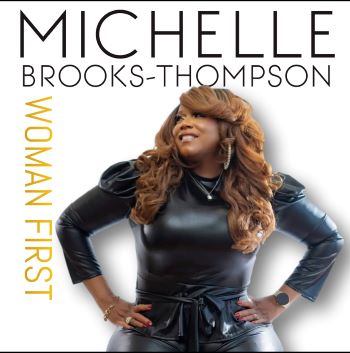 MICHELLE BROOKS-THOMPSON is a US soul and gospel singer whose powerhouse performances have earned her the nickname “the Whitney Houston of Gospel”.

Over the last few years, she’s established herself quite a reputation, beginning with winning  the 2017 Apollo Amateur Night. The $20k prize was as useful as the publicity. Michelle then went onto reach the finals of NBC’s ‘The Voice’ where judge Adam Levine (Maroon 5) opined that she “possessed a supernatural singing ability.”

Judge for yourselves by investigating Ms Brooks-Thompson’s latest single, ‘Women First’ which has just been released by Sony Music/The Orchard. The singer says: “This is a song of empowerment for all women and there is no better time than now to release a song that celebrates women! As we have witnessed throughout history and even more recently with the election of our first female Vice President of the United States, Kamala Harris, women are defying the stereotypes that society has set in place based on gender. We are seeing a rise of women in corporate & political leadership positions, religious leaders, science & medicine, technology, law, and entrepreneurs all over the world. These women have become influences on generations of women to come, by showing them that women are more than the roles that have been prescribed to them because of gender. Additionally, while these powerful & revolutionary women have achieved great success in their professions, many have balanced being a wife or a single mother while raising their family or serving as a caregiver. And these extraordinary women have done so without any of these responsibilities interrupting or hindering their accomplishments and that is something to celebrate and honour.”

Sonically, ‘Women First’ is  powerful builder of a song. After an almost folksy, gentle opening the song takes off with Michelle delivering a powerful vocal performance that betrays her gospel roots and explains why US critics are making the Whitney Houston comparison.