WITH LOVE AND TRUTH…. 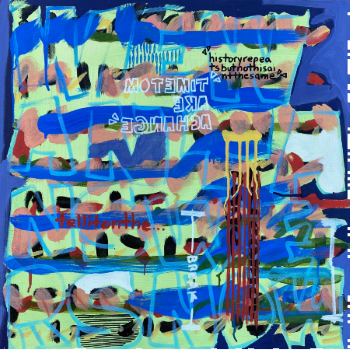 The “band” CRUSHED VELVET & THE VELVETEERS is one of the many musical alter egos of multi-instrumentalist/songwriter/studio engineer and producer ALAN EVANS. (He also works as Soulive, he’s 1/3 of the Alan Evans Trio, and half of The 7 Day Weekend too).

Last time we heard of the Velveteers was last summer when they released a soulful ‘As Far As We Know’ which featured Brother Goodlove on  lead vocals. On release we opined that we’d love to hear more from the good brother and the band and now, lo and behold, our prayers are answered as the team release a full album, ‘Love And Truth’. In essence the concise 8 tracker offers the classic sounds of 60s and 70s urban soul with a contemporary twist and helping Evans and his crew to deliver is a stellar line up of vocalists including Kim Dawson, Saundra Williams (yes, of Saun and Starr – remember their ab-fab 2015 album ‘Look Closer’?), Lyle Divinsky, Yancik and the aforementioned Brother Goodlove.

Goodlove fronts a manic  ‘We Are Not OK’ – best described a take on Northern soul with a crazy Dyke and the Blazers style funk undertow. The aforementioned ‘As Far As We Know’ is also included on the album. The album opener, ‘Really Can’t Get Over You’ (Yanick at the mic) is a breeze while ‘Good Thang’ (Kim Dawson on vocals) and ‘Say Their Names Be The Change’ (Yanick on lead again) both channel the fashionable Sharon Jones/Daptone sound. The album’s real treasure though is the quite lovely ‘You Are My Home’. This features a sensitive vocal from Kim Dawson and a mighty, mellow moment Tower of Power brass arrangement courtesy of the BT ALC Big Band.

Listen, don’t be mistaken! Crushed Velvet and the Velveteers is a cheesy name. They sound like they could be a bizarre Eurovision outfit. In reality they make some serious soul. With Alan Evans in the driving seat, you’d expect that though, wouldn’t you? The album’s out now on Vintage League Music.

Tags: Crushed Velvet and the Velveteers