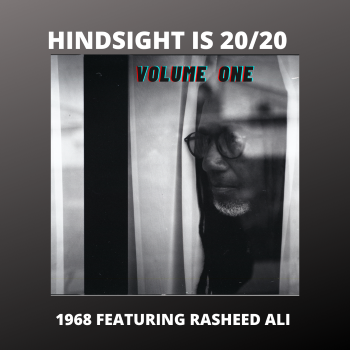 It was six or seven years ago when we first got to know about  US musician RASHEED ALI. Since then, he’s has established a reputation as one of the most intriguing and provocative artists on the contemporary soul scene. Keen on the concept of a “band”, his sonic alter ego is “1968”. He says that he chose that name because that year was a defining year in the history of a younger generation. He calls it “a time when young people woke up the world” and , recording as 1968, Ali strives to shake the world from its lethargy and complacency; to get people to act, to work for a better world, to promote understanding and, simply, to get people to love their neighbours as they love themselves.  To that end he released a series of albums which explored issues like civil rights, roots, heritage and the role/concept of women in society. Interestingly he also issued a single –  ‘A Badge And A Gun’ – his response to the violence against Afro–Americans citizens by trigger-happy US police… hugely prescient in 2016.

Last March, Rasheed issued the fifth album in his series. It was ‘LSD… Love Soul And Devotion’ which he told us then  was “most likely my last 1968 album…because I truly believe I said all that I wanted to say in the genre of Soul Music”. Well, it’s a truism, but we know you can’t keep a good man down and during the lockdowns, Mr A has recorded a new album which has just won release and ‘Hindsight Is 20/20’’, though billed as “volume 1”, indicating a new beginning, takes off where ‘LSD… Love Soul And Devotion’ left off. That’s to say that it’s every bit as questing, provocative and hard hitting as any of his previous five collections. And, of course, going out as 1968, the sonic template is much the same – think Rasheed and trumpeter Ron Taylors’ spin on the sounds of people like James Brown, Norman Whitfield, Curtis Mayfield and Sly Stone though on some of the more mellow tracks you may be able to hear shades of bands like the Blackbyrds.

You don’t need this scribe to tell you that a lot has happened to the world since Rasheed Ali’s last album hit the sales racks and equally you won’t need me to add that Rasheed pulls no punches! The title ‘Hindsight Is 20/20’ is important. It’s as if he’s saying, “well, I told you so” – no more so than with 2016’s ‘A Badge And A Gun’.

Individual song titles will tell you that Rasheed Ali’s crusade continues apace…. ‘The Whole World’s Watching’ (with the  telling chorus, “you can’t restrain the will of the people”), ‘We Could Change The World’, ‘You Can’t Put Me Down’ and ‘Black Pride’ amongst them. That last one seems a key cut …the obvious reference point is ‘Say It Loud I’m Black And I’m Proud’ (JB exhortations to “get on up”) and the suggestion is that a new day is coming.

Most poignant tracks are the mournful ‘Praying For Rain’ (“teardrops falling like pouring rain”) and the closer, ‘A Mother’s Dream’ which builds on the touching plea, “don’t ever make my baby cry”. Every mother, everywhere in the world  will echo and understand that sentiment no matter how old their “baby” may be.