WITH FAITH AND LOVE… 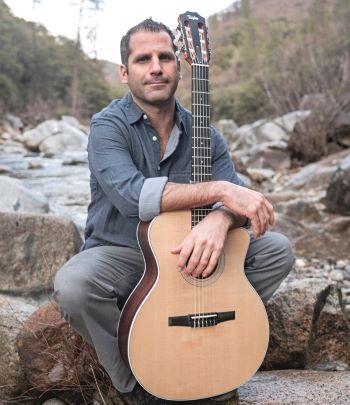 ILAN NAVAH is an American indie singer/songwriter/guitarist. He grew up in Los Angeles and Israel and after graduating high school, he backpacked through East & West Africa, the Middle East, South America, and the Caribbean.

Back in California, Ilan trained as nurse but music always enthralled him. Growing up, his family had an extensive and varied CD collection. From his teens he was a keen concert goer and inspired by what he saw and heard he had his brother teach him the guitar. After a year or so nursing, Ilan had his first experience with ayahuasca, the South American infusion commonly made out of the banisteriopsis caapi vine. It had an immediate impact. Navah realized at once that music was his true passion and that he needed to devote his life to it. Since that experience, he’s spent years on the road making music and working with indigenous tribes seeking their ancient wisdom.

En route, Ilan recorded two albums and now he’s all set to release a third which he says is a distillation of all he’s learned and whose central theme is to offer hope and positivity to challenging times. That mission statement is summed up in the building ballad that is the album’s title track – ‘Faith And Love’… “Everything’s gonna be alright, just got to have faith and love”.

Messages of hope, optimism and positivity run right through the 9 tracker while musically the menu is varied – as you might guess from the artist’s itinerant background. So, for instance, ‘Presence In Zion’ offers a reggae vibe, ‘Give Up The Ghost’ is a stately, gentle samba while ‘Mama’s Blue’s is self-explanatory. Two gentle cuts ‘Rainbow Warrior’ and ‘Hummingbird’ are highlights. Both encapsulate Ilan’s philosophy and are wrapped in some beautiful horn work courtesy of horn arranger, Misha Mullov-Abbado.

So, what to file ‘Faith And Love’ under? It’s “new age” for sure and musically it’s a fusion of soul, blues, funk, gospel, folk and world music. The lyrics offer intrigue and meaning while the full horns section enhances Navah’s subtle melodies. And as someone once said, “what’s so wrong with peace love and understanding”? Nothing.