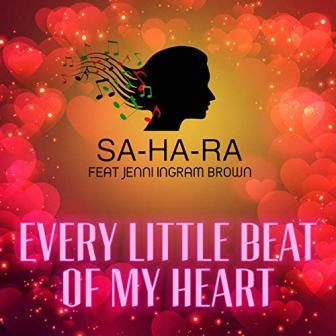 Way back in 1985  Brit band called SAHARA won plenty of support with their timeless dancer, ‘Love’s So Fine’. A year or so back the band (chiefly Peter Hinds, Steve Sinclair and Kevin Ellis) got back together as SA-HA-RA and released an album , ‘Past, Present, Future’.

Now from that LP, the band have just issued a single… a bumpy little soul groove, ‘Every Little Beat Of My Heart’, which was originally written to be a UK Eurovision entry!

Singer on the cut is Jenni Ingram Brown and the song comes in four mixes…. of which the 80’s flavoured ‘Candy Mix’ stands out!