WILLIE WALKER … AFTER A WHILE! 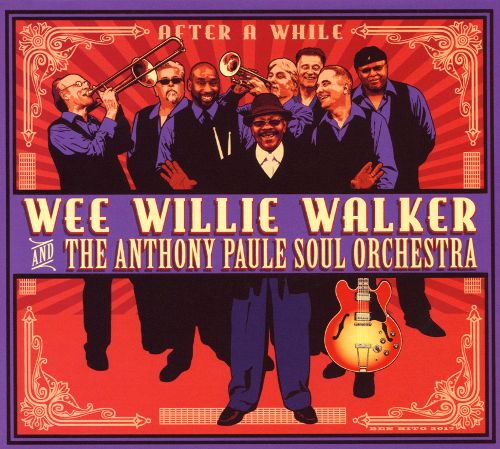 Proper old school soul fans will know about Minnesota-based WEE WILLIE WALKER. Willie’s been working the soul business for over five decades but he’s probably best known for the records he made for the legendary Goldwax label in the 60s. Sides like ‘I Don’t Want To Take A Chance’, ‘There Goes My Used To Be’ and ‘I Ain’t Gonna Cheat On You’ are revered by soul collectors… and rightly so.

Like many of his peers, Willie began his soul odyssey in the church, eventually finding a place in the line up of The Redemption Harmonizers then the Royal Jubileers. A chance meeting with music biz hustler, Timothy Easton, took Willie over to the devil’s music and a place in the Val Dons, then when performing in Memphis on 1965 he was poached as a solo artist by Goldwax. Like many indie label owners, Goldwax’s Clinton Claunch was a hard task master and always behind on royalty payments as well as making sure he got his own name on song writing credits too. Willie Walker, despite cutting quality sides at Goldwax, saw little success or money and he eventually moved on, working in outfits like Willie and the Bees and Salt, Pepper and Spice.

More recently, Willie has collaborated with The Butanes. Together, they recorded three highly acclaimed modern soul records and toured the Netherlands, Switzerland and Japan. He also fronted his own R & B unit, Willie Walker and We “R” with whom he had a monthly residency at the Minnesota Music Café in St. Paul. Willie has also partnered up with Minnesota singer, songwriter, and author Paul Metsa. And despite his poor treatment at Goldwax, Willie is proud of his association with the iconic label and earlier his year, alongside Percy Wiggins, he performed a Goldwax tribute at the Porretta Soul Festival.

Backing for the show was provided by the seven piece Anthony Paule Soul Orchestra and Walker has teamed up with the group again for his latest album – a wonderful 12 tracker, ‘After A While’. And, yes, it might have been a while since we’ve had a Wee Willie Walker record but with this album it’s as if time’s stood still. ‘After A While’ takes us right back to the golden age of Goldwax and Memphis soul. Highlight amongst many is a re-recording of the classic George Jackson song ”I Don’t Want To Take A Chance’… absolutely gorgeous. Amongst the other covers are versions of the Coasters’ ‘Lovey Dovey’ and the Hayes/Porter classic ‘Your Good Thing Is About To End’. The new material particularly ‘Second Chance’ and ‘Cannot Be Denied’ (both penned/co-penned by Christine Vitale) are classic old school songs – the last one in particular is an epic tale of cheating and love gone wrong…. firmly in the Memphis soul tradition.

In essence that’s the attraction of this album. If you’re pining for the golden age of soul, here’s your opportunity to revisit all its power and passion. Little wonder that ‘After A While’ had been nominated for countless 2018 Blues and Soul awards.