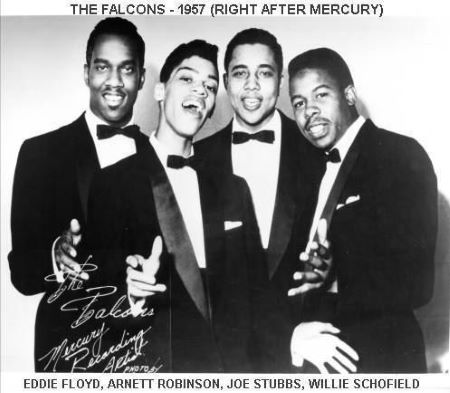 US music sources are reporting the death of soul singer and songwriter WILLIE SCHOFIELD. Few details are available save that Willie was 81 and died at his home in Southfield, Michigan of kidney failure.

Willie Schofield’s biggest claim to fame was that he was an original member of seminal soul group, THE FALCONS. The group was founded in Detroit in the late fifties when Willie joined forces with Lance Finney, Eddie Floyd, Sir Mac Rice and Joe Stubbs. The group’s first big hit was 1959’s ‘You’re So Fine’ which some commentators suggest was amongst the first true “soul” records. When Stubbs (Levi’s brother) left for Motown, Schofield tempted a young Wilson Picket to join the Falcons’ ranks.

Schofield himself left in 1963 and began a later writing a career with his songs recorded by people like the Dells, the Dramatics and the Miracles. Major success though eluded him and through it all he kept his job at the Detroit Ford car plant. He retired in 1995.

In 2016 the Falcons with Willie in the ranks were inducted into the Rhythm and Blues Hall of fame.