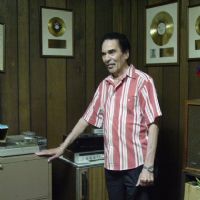 Legendary record producer (and, of course, recording artist in his own right), WILLIE MITCHELL, has died. He was 81. News came via his son, LAWRENCE MITCHELL, who said his father suffered a cardiac arrest on Dec. 19 and died at Methodist University Hospital in Memphis at 7:25 a.m. Tuesday.
MITCHELL, who was born in Ashland, Mississippi in 1928, is best known for his work with AL GREEN but he was a celebrity musician way before his involvement with GREEN. He began playing trumpet aged just 8 in Memphis, the city where his family had settled in the ’30s and after a spell in the army he became a popular Memphis band leader. In 1959 he joined Hi Records as a studio arranger and producer though he continued to play live with his band throughout the Southern states. He recorded numerous Hi albums with his band, then in 1970 – when label boss JOE COUGHI died – he found himself in charge of the studio and took control of producing a young AL GREEN, whom he’d bought to the label the previous year. At Hi MITCHELL also worked with ANN PEEBLES and SYL JOHNSON and continued to make his own recordings. Ever-busy, he also owned Memphis’s famed Royalty Studios and he worked with many of the great Southern soulsters. Musically active till very recently, he received a Trustees Award from the Grammy Foundation in 2008 and a Memphis boulevard was named in his honour. Yet in his biography, he often refers to the New Year’s Eve parties at ELVIS PRESLEY’S house (where his band provided the music) amongst his greatest moments.