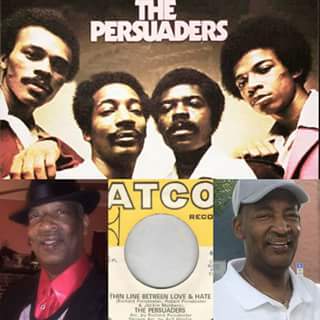 Holland helped form the Persuaders in the Bronx in 1969 by bringing together members of the Internationals and the Majestics. The Persuaders original line up was lead singer Smokey Scott supported by Jimmy Barnes, Charles Stodghill and Willie Holland.

The group signed to Atlantic/Atco in 1971 and scored a huge hit with Richard Poindexter’s ‘Thin Line Between Love And Hate’. The song remained their biggest hit though they enjoyed R&B hits with ‘Love Gonna Pack Up And Walk Away’ and ‘Some Guys Have All The Luck’ (covered, of course, by Rod Stewart and Robert Palmer).

After the hits dried up the group underwent numerous personnel changes and eventually disbanded, though a group of “Persuaders” still tours and in 2006 released the acclaimed album ‘Made To Be Loved’. Willie Holland wasn’t a member of that particular line up, though as the last surviving member of the orignal line-up, the producers were keen to get him involved. Willie provided backing vocals on several tracks and was heavily involved on the closing tune ‘All The People’. The album is still available from specialist soul shops. Thanks to Andy Lothian of www.365soul.com for the information regarding ‘Made To Be Loved’.