WILD IN THE COUNTRY! 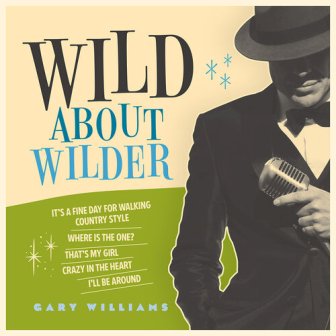 ALEC WILDER (1907-1980) was a major contributor to the “Great American Songbook” – but unlike, say Cole Porter, Wilder is not that well known. Some musicologists suggest that it’s because much of his work is a tad more eclectic than what was considered the norm. UK singer GARY WILLIAMS has recently set out to help re-establish Wilder to his rightful place as a key and recognized writer in the Golden Age of the songbook by releasing a 5 track EP of Wilder songs… ‘WILD ABOUT WILDER’.

The five songs on the EP were recorded some time ago. Three – ‘Where Is The One?’, ‘Crazy In The Heart’ and ‘That’s My Girl’ were recorded in 2006 but Gary has never yet released them. The other two songs are ‘It’s A Fine Day For Walking Country Style’ (released in 2008 on Gary’s  ‘Swingin’ On Broadway’ album) and, perhaps Wilder’s best known song,  ‘I’ll Be Around’ which, featuring a lush backing from the fabled John Wilson Orchestra, was originally released on Gary’s 2004 LP ‘Alone Together’. Together the five songs – all stylishly presented – should help restore Alec Wilder to the songwriters’ Pantheon.

Gary’s been busy on another front too. During the lockdown, with little else to do professionally, he’s been, via the magic of the internet, presenting a new song every day from his kitchen. His “Kitchen Cabaret” has attracted lots of fans with Gary even responding to requests – one of the most popular being the ‘Italian Job’ theme ‘On Days Like This’. Gary now wants to put the most popular of his “Kitchen Cabaret” songs on an album and in order to do this he’s established a crowd funding venture.

Gary says: “This is such a dark time for so many people,” he said “that it would be lovely to come out of it with a new album of beautiful songs to make the world just a little bit brighter.” Find out more about ‘Kitchen Cabaret’ and ‘Wild About Wilder’ via Gary’s web site… www.garywilliams.co.uk