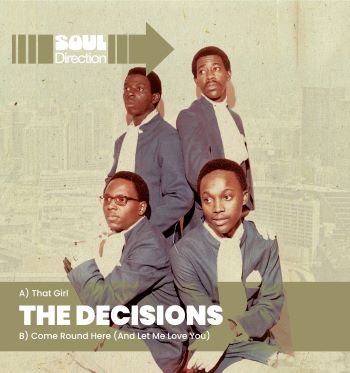 One of last year’s best-selling releases from UK niche soul reissue specialist, SOUL DIRECTION was a delightful 7” from  Atlanta harmony group,  THE DECISIONS.

The group were active  in the 60s and early 70s and  originally consisted of Hildred Thomason, Fred White, Henry Little, Howard Simpson and Harvey Poole who soon left to join the military leaving the group with a classic quartet line up. The Soul Direction single paired two cuts from 1968, ‘We’re In Love’ and ‘I Love You’, recorded when the boys ran their own York label. For reasons never fully explained the songs were never released despite their soulful, harmonic quality. Little wonder when Soul Direction put ‘em out, the 7” sold out immediately. So it was a no brainer for the Soul Direction  sleuths to try to track down more music from the group. And, alleluia, they were successful, discovering two new cuts that it seems were recorded in 1968 for York but (like the two recordings mentioned above) “got lost” having been sent over  to various LA labels in the hope of winning a bigger deal and major distribution.

This new Decisions’ 7” pairs ‘That Girl with ‘Come Round Here’. The former is a jaunty, simple outing with bags of charm. It’s a classic 60s group sound – full of youthful optimism and sweet harmonies. The latter is touch slower and in places  reminds me of something by the Drifters. Again, its simplicity is one of its big attractions. It’s tagged as  the B side, but that doesn’t make it inferior.

As a footnote, the Decisions eventually signed to Sussex Records where they enjoyed some success with ‘I Can’t Forget About You’ and ‘Stop Playing Around’. The Decisions stayed with Sussex till 1973 then split – with three of the group going on to form Unity – a band that recorded for Apex Records.

Find out more about the Decisions and their singles  @ www.soul-direction.co.uk