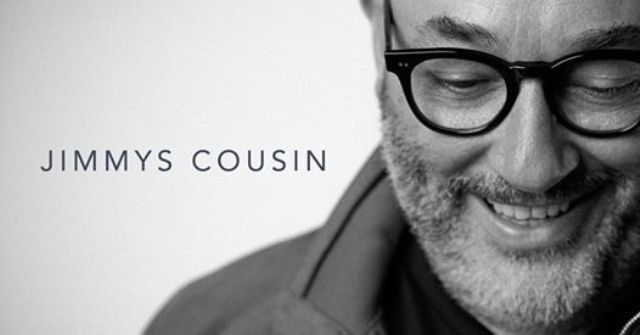 JIMMY’S COUSIN is the musical alter ego of Irish singer/songwriter Ian Dodson. In typical Irish fashion Ian explains that while he was gowning up he was forever in the shadow of his big brother, Paul and so became known as “Paul’s brother“. Then, in the 1990 he moved to America where he lived with his cousin Jimmy… you’ve guessed it – he now became “Jimmy’s cousin” and so when he was all set to launch his debut album ‘Waxwings’ earlier this year, what better name to go out under. He was, after all, “Jimmy’s Cousin” and that’s about it!

The music on ‘Waxwing’ though isn’t Jimmy’s! It’s uniquely Ian Dodson’s – very particular, unusual and different. The soundscape? Well, there are elements of jazz, pop, blue eyed soul and folk – all delivered with the deep emotions that you associate with Irish troubadours. And that last point will draw inevitable comparison with a certain Van Morrison. And yes, there are flavours of Morrison throughout ‘Waxwings’ – both men write and perform with an Irish heartbeat, but Jimmy’s voice is mellower… the voice of a crooner rather than the voice of blue-eyed soul man.

Lyrically, like Morrison, the songs on ‘Waxwings’ have a real depth and many are fiercely introspective. There are plenty that tackle break up and the accompanying grief – like ‘Love Is Only For The Fools’ and ‘I’ll Never Love Again’. They’re amongst the album highlights alongside the semi-autobiographical opener, ‘Astor and 8th’ – a tale of the singer’s first encounters with New York – and the gorgeous, melodic ‘Look At Me Now’. There’s a whiff of Jimmy Webb and/or Richard Hawley on some of these!

The album has been produced by guitarist Dave Keary who’s worked with people like Taj Mahal, Bobby Womack ,Gregory Porter and …yes, Van Morrison- he’s a key and valued member of Van’s band. He and the other players (including a superb and subtle brass ensemble) craft a wonderfully sympathetic background for the 10 songs. Of especial note is the chromatic harmonica of Mick Kinsella who helps bring just the right amount of melancholy to proceedings.

Jimmy’s Cousin/Ian Dodson’s been making music off and on for something like 30 years…but ‘Waxwings’ is the official debut album. Maybe it will make him one of those famous “overnight successes”… recommended!