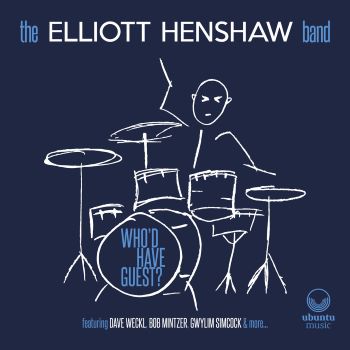 ‘Who’d Have Guest?’ is the clever, intriguingly titled  new album from respected UK drummer ELLIOTT HENSHAW. Henshaw has worked with all kinds of people across all kinds of genres – most interesting to us David Benoit, the Drifters, Gwen Dickie, Georgie Fame and Beverly Knight. His standing in the UK music community is such that he can call on plenty of “names” to help him craft his own albums  and that explains the title of this one, his latest.

On the 11 tracker the core band is bassist Andrew McKinney, keyboardist Matt Steele, guitar man James Pusey and saxophonist Simon Willescroft. Between them they’ve worked with people like Joss Stone, Beverly Knight, the Brand New Heavies and James Taylor. Adding even more beef to the album are the guests in the album title – amongst them Miranda Wilford, Noel Sullivan, Bob Mintzer, Dave Weckl and  Gwilym Simcock.

With such a line-up, a varied musical menu is guaranteed. ‘Who’d Have Guest?’ offers all kinds of everything from blistering, brass-fuelled funk to gentle chill out grooves with all sorts of everything in between. Immediate attention grabber is ‘Monte Carlo’ – a vocal cut with Miranda Wilford at the mic. It comes over as  cocktail of Tower of Power and Swing Out Sister with a garnish of Madonna’s ‘Vogue’. Among the big funk workouts is ‘Direct Input’ – all wah guitar and brash brass (courtesy of powerful brass section – Tom Walsh, Simon Niblock and Chris Traves). ‘Hiding To Nothing’ offers a dirtier kind of funk, replete with Hendrix style guitar. Of course, remember, that it’s a  drummer who’s the marquee name here, so expect plenty of crashing percussion and the obligatory solo on the closing ‘Scotty The Brave’

THE ELLIOTT HENSHAW BAND; ‘Who’d Have Guest?’ is released on ubuntu music on August 27th.