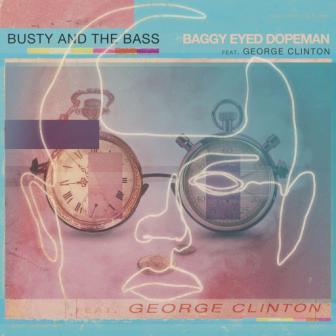 Despite UK tours and some BBC coverage, you may not have heard of ’em yet but BUSTY AND THE BASS are BIG in Canada – well certainly in their native Montreal. That could be all set to change as the octet (Nick Ferraro [vocals, alto sax], Evan Crofton a.k.a. Alistair Blu [vocals, keys, synths], Scott Bevins [trumpet], Chris Vincent [trombone], Louis Stein [guitar], Milo Johnson [bass], Eric Haynes [keys, piano], and Julian Trivers [drums)) release a new single… the first from their upcoming album.

Cut in question is ‘Baggy Eyed Dopeman’ –a tune as bonkers and captivating as the title suggests! It runs in at three and half minutes and all kinds of everything is going on! It sort of combines West Coast harmonies (remember Alessi?) with Tower of Power brass, big booming bass lines, off the wall sections and a flavour of Outkast… hardly surprising… the track was produced by the Grammy-winning Neal Pogue a regular OutKast collaborator and it features no less a personage than George Clinton adding his unfettered interstellar psychedelic funkiness like only he can! Like we said bonkers… but brilliantly bonkers. We look forward to the album. ‘Baggy Eyed Dopeman’ is out now on Arts and Crafts records.